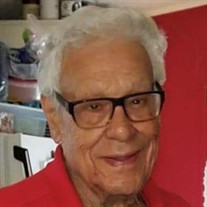 Joseph Charles “Butters” Pepitone Sr., 91, of South Beloit, IL, passed away on Saturday, February 13, 2021 in his home. He was born on November 18, 1929 in Beloit, WI, the son of Charles and Josephine (Fauzzia) Pepitone. Joseph was a graduate of Beloit High School. He attended the University of Kentucky, Lexington, KY. Joseph played football for Bear Bryant while he attended the University and was scouted by the Green Bay Packers. He was a veteran of the U.S. Army. He married the love of his life Diana M. Stanford on July 3, 1969 in Reno, NV and were married for 52 years. Joseph was formerly employed at Beloit Corporation, retiring in 1978. He was member of the Italian American Club and Lega Muta Club. He enjoyed playing tennis and fishing. Joseph was an avid Chicago Bear fan. Survivors include his wife, Diana Pepitone of South Beloit, IL; son, Joseph C. (Pam) Pepitone Jr. of Inverness, FL; granddaughters, Kari Lynn Pepitone and Karlee Kay Ramsey-VanOrden both of Inverness, FL; great grandchildren, Jackson Joseph Rady, Emma Kay Rady, and Jakob Anthony VanOrden all of Inverness, FL; stepdaughter, Vicky L. Vance of Rockton, IL; brother-in-law, Loyd Gregory of Loves Park, IL; nieces, Nancy (Dennis) McKinney of Mountain Home, AK, and Lori (Bill) Englund of Rockford, IL; nephews, Charles (Dawn) Gregory and Mike Fulling both of Rockford, IL; cousins, Jacqueline Parochka of Loves Park, IL and Mimi (Lyle) Rasmussen of Rockton, IL. Joseph was predeceased by his parents; sisters, Angeline Pepitone and Josephine Gregory; niece, Sharon Fulling. A Funeral service for Joseph will be 10:30 a.m. Friday, February 26, 2021 at the Daley Murphy Wisch and Associates Funeral Home and Crematorium, 2355 Cranston Rd, Beloit, WI. Entombment will be at Floral Lawns Cemetery, South Beloit, IL, with Military Rites accorded by the V.F.W. post #2306. A visitation of remembrance will be from 9:30 a.m. until the time of service Friday in the funeral home. Social distancing and face mask are required. In lieu of flowers, memorials may be given to the family for a memorial that will be established in his name at a later date.

The family of Joseph Charles Pepitone created this Life Tributes page to make it easy to share your memories.

Send flowers to the Pepitone family.