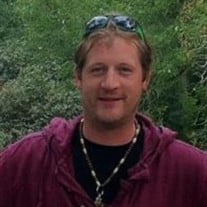 Joshua James Snudden, 41, of Beloit, WI, passed away on Friday, January 14, 2022 in his home. He was born May 13, 1980 in Beloit, WI, the son of James W. and Judy K. (Hutter) Snudden. Joshua attended Turner High School and Cape Fear Community College where he studied Electronic Media and Film. Joshua was a talented photographer, the CEO of Northern Film, and an excellent cook. He worked at numerous restaurants over the years, including Pineapple Willy’s in Panama City Beach, Florida, and most recently at Jersey’s in Beloit, WI. He was a member of several photography groups and a former member of the YMCA Leadership Club, with whom he attended the Tri-Field Leadership Conference at Camp Kitaki in Nebraska twice. Josh loved camping, gardening, photographing concerts and nature, being at the beach, and spending time with his beloved puppy, Buttercup, who he often affectionately referred to as Stinky. He loved jam bands, and he especially loved Big Something, who he recently saw and photographed in Milwaukee. He also enjoyed helping his parents with yard work and many home maintenance projects as they aged, driving his mom to her appointments when she couldn’t drive, and just last summer he helped his dad tear down the old deck and build a new one. Those who knew Josh well will remember him as we do: he was a sweet guy, a good person, funny, playful, kind, generous, resilient. He had the gift of being able to make friends instantly, and was always quick with a hug or a kiss on the cheek. He had a big heart and would bring home stray animals in need of rescue; that’s how Buttercup and Buster became part of the family. We love you so much, Josh. We sure wish we could’ve had more time. We think we must have done something special in our lives to deserve a son like you. Josh, thank you for getting under our feet, causing us sleepless nights, costing us a small fortune, interfering with our plans. What on earth would we have done with our time without you! Home is the one place in the world where a son can be truly accepted for himself. A parent’s proudest boast of any son is not wealth or his success — but that he is a good son, a good friend, a decent person. Josh, it is you as you are that we love. XOXOXO Mom & Dad Survivors include his parents, James and Judy Snudden of Beloit, WI; sisters and brother, Jodi (Glen) Kohler of Marshall, WI, Jason (Char) Snudden of Roscoe, IL, and Janelle Snudden of Beloit, WI; nieces and nephews, Tara Collins, Riley, Carly and Austin Geier, Cameron and Carter Snudden; paternal grandmother, Margaret Snudden of Janesville, WI; aunts and uncles, Joyce (Owen) Peters of Janesville, WI, Jean Anton of Reeseville, WI, William Hutter of Beloit, WI, Joseph (Nancy) Hutter, Gene (Beth) Hutter both of Beloit, WI, Sharon (Phil) Winkelman of Beloit, WI, Bonnie (Gary) Johnson of Beloit, WI, Shirley Hutter, Mary (James) Driscoll, and Betty (Michael) Olds all of Beloit, WI; two great nieces; and many cousins. He was predeceased by his maternal grandparents, Wayne and Dolores Hutter; paternal grandfather, Walter Snudden; uncle, Jon Snudden; and aunts, Carol and Rosanne Hutter. A Funeral Mass of Christian Burial for Joshua will be at 10:00 a.m. Tuesday, January 25, 2022 in Our Lady of the Assumption Catholic Church, 2222 Shopiere Road, Beloit, WI, with Fr. Michael Resop officiating. Burial will be in Mt. Thabor Cemetery. Visitation of remembrance will be from 5 to 7 p.m. Monday in the funeral home. Memorials may be given in his name to NAMI (National Alliance on Mental Illness) or the Humane Society of Southern Wisconsin.

The family of Joshua James Snudden created this Life Tributes page to make it easy to share your memories.

Send flowers to the Snudden family.