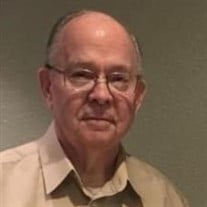 On Tuesday March 16, 2021 Keith Edmonds, son, brother, husband, father, uncle, grandfather, friend, bid his earthly body goodbye after leaving his fingerprints all over the world he left behind. Keith was born in Beloit on September 21, 1938 along with his twin brother Kenneth, to Clarence and Beulah (Carpenter) Edmonds, joining older siblings LaVern, Earl, and sister Donna. Childhood memories he shared with his family included life on Berry Hill Farm, ice skating on the Rock River, delivering the Beloit Daily News (supposedly to half of Beloit) on his bicycle, assisting his dad at the Spud Nuts Doughnut shop, playing in the Beloit Memorial High Marching Band (Class of 1957), and being involved with the youth group at Peoples Church, of which his parents were founding members. Keith met Donna (Ruef) from Orfordville, through a friend from church, during his senior year and they married on March 8,1958. The newlyweds moved to Freeport where Keith was training to manage a Produce Department for Kroger’s. They returned to Beloit and Keith continued with Kroger’s before transitioning to route sales and deliveries with Borden’s Milk, Frito Lay, and Colonial Bread. He carpooled with friends for several years to a job as a machine operator at Rockford Screw Products, worked at Zinke’s on Madison Rd., pumped gas at Browny’s, and eventually ended up at Woodman’s Supermarket where he was the Produce Manager, a position he held for 30 years before retiring from the “Banana Factory” in 2000. Keith and Donna started their family in December 1958 with the arrival of son Patrick, followed 3 years later by son Jim, and 3 years after that, daughter Pamela. The family was active at Peoples Church where Keith was an usher, a regular contributor to the music program with his brother Kenneth and their “twin trumpets”, serving eventually on the Trustee board. Most recently he was a member of Central Christian Church in Beloit. Keith loved fishing, telling fish stories, many of which he first heard from his Uncle Vic (Page), new cars, spending time with his extended Edmonds family (40+), Limburger cheese, pickled fish, and the Wisconsin sports Trinity: The Packers, Brewers and Badgers. In the early 1970’s he started vacationing in the Birchwood area of northern Wisconsin and looked forward to returning each year. He was able to share those vacations with extended family and created special memories for each of his grandchildren, spending countless hours baiting hooks, sipping “soda water”, and cleaning their catch. Each grandchild could drive a boat long before they could drive a car. In retirement he and Donna travelled by bus with groups from Central Christian, to New England, New York, Washington, DC, Nashville, San Antonio, and elsewhere. They enjoyed a week in the Caribbean on a chartered sailboat with cousin Lynn (Page) Spooner and her husband Larry, made a couple of trips to visit son Patrick and his family in Oregon, as well as visits to grandson Andrew’s family in Indiana and granddaughter Brittany’s family in Ohio. He was a regular volunteer at Beloit Snapper games, Riverfest, Caritas, and the CARE Food Pantry at Central Christian. Keith leaves behind his wife, Donna of 63 years; twin brother, Kenneth (Marie) of Beloit; son, Patrick (Jackie) and grandsons, Ryan, Cory (Marissa), and Tim; son Jim (Deb), grandson Andrew (Samantha), and granddaughter, Brittany (Tyler Morgan); and daughter Pamela; great grandchildren Finnegan, Judah, and one on the way (Cory/Marissa), Madilyn and one on the way (Andrew/Samantha), Ezekiel, Sadie (Brittany/Tyler Morgan); numerous nieces, nephews, cousins, sisters-in-law, a brother-in-law, two grand-dogs, Samson & Annie (Pamela) and three great grand-dogs, Zoe (Cory/Marissa), Milly (Andrew/Samantha), and Titus (Brittany, Tyler). Keith Edmonds was a fun loving, storytelling, kind hearted, hardworking, family focused, son, brother, husband, father, and grandfather who impacted his family and friends in ways they will continue to discover. We can go forward in life, confident that in his passing, Keith heard the cherished words, “welcome home good and faithful servant”. Special thanks to the staff at Green Knolls Care Center and Beloit Regional Hospice who took good care of him and guided our family through his last days. A Memorial Service will be at 11:00 a.m. on Saturday, April 10, 2021 in the Central Christian Church, 2460 Milwaukee Rd, Beloit. A Visitation of Remembrance will precede the service starting at 10 a.m. Face masks and social distancing guidelines will be observed. Daley Murphy Wisch & Associates Funeral Home and Crematorium, 2355 Cranston Rd., Beloit, WI, assisted the family with arrangements. Memorials can be sent to Beloit Regional Hospice or to the family.

On Tuesday March 16, 2021 Keith Edmonds, son, brother, husband, father, uncle, grandfather, friend, bid his earthly body goodbye after leaving his fingerprints all over the world he left behind. Keith was born in Beloit on September 21, 1938... View Obituary & Service Information

The family of Keith L. Edmonds created this Life Tributes page to make it easy to share your memories.

Send flowers to the Edmonds family.