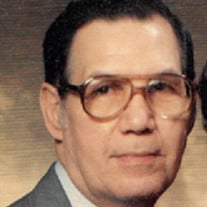 Kenneth L. Watson, 96, of Beloit, WI, died on Friday, December 24, 2021 at Willowick Moments, Clinton, WI. He was born on March 14, 1925 in Beloit, WI, the son of Carl and Mabel (Terwilliger) Watson. Ken was a 1943 graduate of Beloit High School. He was a veteran serving with the U.S. Army Infantry 86th division. Ken married Margaret Benoit in April of 1945 in Riverside, CA. She predeceased him in July of 1995. He married Coleen Vogelson in 1997 in Sturgeon Bay, WI. Ken was employed by Fairbanks Morse as an engineer for 38 years, retiring in 1988. He was a member of Crime Stoppers, Our Lady of the Assumption Catholic Church and former member of the Beloit Elks Lodge #864. Ken was also a member of the Disabled American Veterans and a member of the American Legion West Field Post #48. He enjoyed boating, camping and computers. Survivors include his daughters, Becky Watson, Mary Kay Perry and Kathy (Vernon) Price all of Beloit; grandson, Michael (Julie) Perry of Janesville; great grandchildren, McKenah, Azriel and Brighton Perry; sister, Helen Busch of Baltimore, MD; brothers, Raymond Watson of Beloit, William Watson of Beloit, Gerald (Heidi) Watson of Beloit; sister-in-law, Jan Watson of TX; and several nieces and nephews. He was predeceased by his parents; son, Kenneth Jr.; sisters, Marilyn Showen and Betty Jean Lensert; brother, Dale Watson; brothers-in-law, Chuck Showen and Warren Lensert; sisters-in-law, Ada Watson and Beverly Watson; son-in-law, Dan Fingerhut. A Memorial Service will be held at 6:30 p.m. on Tuesday, January 4, 2022 in the Daley Murphy Wisch & Associates Funeral Home and Crematorium, 2355 Cranston Rd., Beloit, WI, with Fr. Michael Resop officiating. Burial will be in Mt. Thabor Cemetery at a later date. Visitation of remembrance will be from 4:30 p.m. until the time of service Tuesday in the funeral home. In lieu of flowers, please send memorial donations to a charity of your choice in Ken’s name.

The family of Kenneth L. Watson created this Life Tributes page to make it easy to share your memories.

Send flowers to the Watson family.