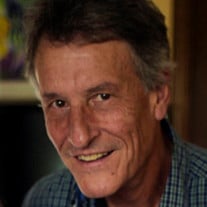 Kevin Meyer, 67, of Beloit, WI, died unexpectedly on Monday, February 28, 2022 at Beloit Memorial Hospital surrounded by family. He was born on October 3, 1954 in Milwaukee, WI, the son of Marlene (Blue) Meyer, Clayton Meyer and Wayne Krofta. Kevin was a 1972 graduate of Beloit Memorial High School. He married to Virginia Young on January 1, 1978. They had 3 children. Above all, Kevin was a proud father. Parenting was his greatest accomplishment and passion. His parenting style proved to have a generational impact within his family. By trade, he was a professional painter. He loved transforming homes and apartments and could flawlessly cut in an edge by hand. Kevin was a proud lifelong Beloiter. He was a Wisconsin sports and culture enthusiast, and volunteered for Beloit International Film Festival, and the Beloit Snappers. He loved attending live music events of all genres with his family. Among his favorites were Riverfest, Harry’s Place, and the Independence Day festivities with the BJSO. In his youth, he was the president of the Luther League at Our Savior’s Lutheran Church. He was also a member of the YMCA Boys Choir, Boy Scouts, and an exceptional tenor sax player for the Beloit Memorial High School band. Kevin was a brilliant man who loved to learn, analyze, and share information on a wide variety of topics, including sports, world history, and current events. He had great appreciation for dynamic story telling through TV and film and would enthusiastically recommend his newest favorites to his children. He expressed his love and creativity by cooking. He created dishes with sophisticated flavor profile and experimented with unexpected ingredients. A trip to New Orleans kick started a fascination with Cajun and Creole cuisine and his signature dish became Shrimp Filé Gumbo. Kevin instilled in his children a love of driving and road trips. They spent summers finding adventures in the outdoors of the Midwest. Among his strongest qualities was his ability to help loved ones navigate a crisis. Many would say there is no one they would rather have in their corner during a difficult time. These traits were complimented by his unmatched wit, charm, and disarming humor. Survivors include his children, Erin Bockoven-Troll (Mark Troll) of Cedar Rapids, IA, Patrick Meyer (Devin Carter) of Chicago, IL, and Ivy Meyer (Jared Shmikler) of Loveland CO, and their bonus sibling Mary Dalman of Minneapolis, MN; grandchildren, Clayton Bockoven and Coree Troll; sister, Linda Criswell (David) of Portland, OR; brothers, David Meyer (Dawn) of Beloit, WI, and Steve Meyer of Fort Collins, CO; several nieces, nephews, other relatives and friends. He was predeceased by his parents, Wayne Krofta, Clayton Meyer, and Marlene Meyer; aunts and uncles. A Celebration of Life will be held at Hatley’s Pub, 435 E Grand Ave, Beloit, WI, 53511, on Saturday, March 5, 2022, beginning at 4pm, followed by adventures unknown. In lieu of flowers, memorials may be given to the family for his grandchildren’s higher education https://everloved.com/life-of/kevin-meyer/donate/

The family of Kevin Meyer created this Life Tributes page to make it easy to share your memories.

Send flowers to the Meyer family.