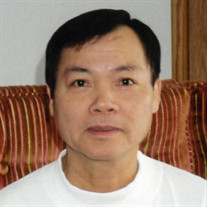 Kieu Nguyen, 74, of Beloit, WI, died on Thursday, February 25, 2021 at Beloit Memorial Hospital. Kieu was born on June 6, 1946 in Da Nang, Vietnam, the son of Loi and Luong Nguyen. He married Be Thi Vo on May 23, 1992 at the First Baptist Church of Beloit. Kieu was in the Vietnamese Army and aided the United States Army during the Vietnam War. When Saigon fell in April of 1975, he was able to escape Vietnam and began his journey to the United States. Kieu escaped on a small fishing boat with a group of around 50 people and was later rescued by a U.S. Navy ship. From there, he went on to stay at a refugee camp in Guam. He then flew to a U.S. military base in the Northern Pacific Ocean and then to Camp Pendleton in California to await sponsorship. Kieu arrived in Beloit in September of 1975, sponsored by the First Baptist Church. He started working as a cook in different restaurants. Kieu would then find employment at Wisconsin Knife Works, where he worked for 43 years all the way up to his passing. His family was precious to him and he was always a good provider to them. Kieu was granted citizenship in July of 2008. His enjoyments included tending to his vegetable garden, fishing, drinking Heineken’s, and rooting on the Green Bay Packers and Wisconsin Badgers. Survivors include his wife; children, Chau and Huong of Da Nang, Vietnam, Elizabeth (Daniel Banh) Nguyen of Dublin, CA, and Kevin (Maggie Yang) Nguyen of Madison, WI; and many friends. He was predeceased by his parents and mother-in-law, Mang Vo. The family would like to thank the incredible Covid Critical Care Unit at Beloit Memorial Hospital for their compassionate care of Kieu. A Funeral Mass of Christian Burial will be at 10:00 a.m. on Tuesday, March 2, 2021 in the Our Lady of the Assumption Catholic Church, 2222 Shopiere Rd., Beloit, WI, with Fr. Michael Resop officiating. Burial will be in the Mt. Thabor Cemetery. Visitation of remembrance will be from 9 a.m. until the time of service Tuesday in the church. Social distancing and face mask are required. Daley Murphy Wisch & Associates Funeral Home and Crematorium, 2355 Cranston Rd., Beloit, WI, assisted the family with arrangements. In lieu of flowers, memorials can be made to the family.

The family of Kieu Nguyen created this Life Tributes page to make it easy to share your memories.

Send flowers to the Nguyen family.