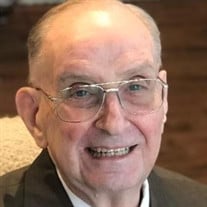 Reverend Dr. Lance Alan Herrick, 84, of Janesville, WI, passed away on Tuesday, February 1, 2022 at Cedar Crest Independent Living. He was born on May 10, 1937 in Harvard, IL, the son of Robert and Roma (Rawson) Herrick. Lance graduated from Carleton College with his Bachelors Degree. He then earned his Bachelor of Divinity at the Garrett-Evangelical Theological Seminary. Lance later earned his Ph.D from the University of St. Andrews in Scotland. He married Mary Anne Estes on December 27, 1964 in Evanston, IL. Lance was a Pastor for the Wisconsin Conference of the United Methodist Church. He served in Cudahy, Milwaukee (Kenwood), Platteville, Beloit and Whitewater. Lance was a proud Eagle Scout. He was a volunteer for the Health and Welfare Ministries and for the Carleton Alumni Association. Lance enjoyed reading, music (singing) and riding his bike. He loved trains, watching baseball and football, and especially sharing his passions with his children and grandchildren. Survivors include his wife, Mary Anne; children, Sara Herrick, Kristin (Craig) Marquardt and Robert (Stefanie) Herrick; grandchildren, Karlie, Kenzie and Christopher Marquardt; and nephew, John Herrick. Lance was predeceased by his parents; sister, Delda H. (Robert) White; brother, Kenneth Roy (Johanna Waller) Herrick; and granddaughter, Calliope Jo Marquardt. A Memorial Service for Lance will be held at a later date in Milwaukee. Inurnment will be held in Mt. Auburn Cemetery in Harvard, IL. Daley Murphy Wisch & Associates Funeral Home and Crematorium, 2355 Cranston Rd., Beloit, WI, assisted the family with arrangements. In lieu of flowers, donations in his name may be made to Garrett-Evangelical Theological Seminary in Evanston, IL or Carleton College in Northfield, MN.

Reverend Dr. Lance Alan Herrick, 84, of Janesville, WI, passed away on Tuesday, February 1, 2022 at Cedar Crest Independent Living. He was born on May 10, 1937 in Harvard, IL, the son of Robert and Roma (Rawson) Herrick. Lance graduated from... View Obituary & Service Information

The family of Lance Alan Herrick created this Life Tributes page to make it easy to share your memories.

Send flowers to the Herrick family.