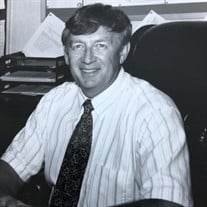 Most people will probably remember him as Coach Weber, a loving husband, father and grandparent, or an excellent athletic administrator. To those who knew him well he was so much more. Born in Kane, Pennsylvania and raised in South Beloit, Illinois, Larry was the son of Millard Fillmore Weber and Josephine (Cussins) Weber. He attended Western Illinois University where he earned a teaching degree and met the love of his life and soulmate, Antoinette Cook. They landed in Rockton, Illinois where he took a teaching job at Hononegah High School and together they set out to help make the quaint town of Rockton a wonderful place to live. “Always deliver more than you promise,” he’d always say. When you wanted something done right and with a smile, you called Larry. He ran the Recreation Department in Rockton; managing the pool, organizing baseball/softball, starting the Hut Day Camp program for kids who needed free, safe, fun, activities during summer vacation, and grounds keeping. Christmas time was always done up right in the park, and hearing everyone shout, “Larry! light the lights!” was a big event as he plugged in the giant town Christmas tree. “I’ve never had to work a day in my life. I’ve done what I loved and it hasn’t seemed like work to me!” was what he had to say about his tenure teaching industrial arts, coaching Hononegah football, basketball, track, and founding a regionally recognized baseball program, earning him a place in the Illinois Coaches Hall of Fame. Weber Field (The Web) will forever stand as his legacy. He moved up to Athletic Administrator and Assistant Principal at HCHS before his wife and himself retired together in 2003. Larry was an avid sports fan. He played softball for the Razor’s Edge, and founded the locally undefeated Weber’s Commandos with his son Eric. He would often be found on the basketball court at Hononegah in the mornings, and played on a competitive team in Beloit. He spent his time in retirement traveling the world with his wife and going to sporting events; especially at Hononegah and Miller Park. He was a die hard Brewer and Packer fan, and he loved imparting wisdom to his children and grandchildren about sports, teaching and life. To many Hononegah students he was the one person who believed in you, even when you’d proven that you didn’t deserve it. He’d pull you up short, make you laugh, and show you there was more to life than whatever it was you were going through at the time that seemed insurmountable. He cast vision out like baseballs, making tough life goals seem not only attainable, but even fun to work hard towards. He cherished his children Lisa Marie (Larry) Jacob of Naperville, Illinois, and David “Eric” (Karli) Weber of Rockton, Illinois. He never missed a game or dance performance of his children and did not miss an opportunity to let them know how proud he was of them. He is also survived by 5 grandchildren. Zachary (Katherine) Jacob, Kelsey Jacob (fiancé Tyler Walker), Kyle David Weber, Annika Victoria Weber, and Easton Johnson Weber and his sister, Diane (Tony) Cornellier. Larry is preceded in death by his parents and his beloved wife Toni, who he has now joined in Paradise. Funeral service will be at 2:30 p.m. Monday, December 14, 2020 in the Daley Murphy Wisch & Associates Funeral Home and Crematorium, 2355 Cranston Road, Beloit, WI, with Fr. David Beauvias officiating. Burial will be in Rockton Cemetery. Visitation of remembrance will be from 12:30 p.m. until the time of service Monday in the funeral home. Social distancing and face mask are required. In lieu of flowers, donations towards the Weber Baseball Scholarship Fund founded after his retirement are much appreciated. He stated, “It isn’t always the player with the most talent that makes it in life, it is the kid with the most heart.” Those are the recipients to whom he awarded his non-merit based scholarship. Larry believed that with a zest for life, discipline, and character, everyone could achieve greatness, and we would like to carry on that tradition in his honor.

Most people will probably remember him as Coach Weber, a loving husband, father and grandparent, or an excellent athletic administrator. To those who knew him well he was so much more. Born in Kane, Pennsylvania and raised in South Beloit,... View Obituary & Service Information

The family of Larry Allen Weber created this Life Tributes page to make it easy to share your memories.

Most people will probably remember him as Coach Weber, a loving...

Send flowers to the Weber family.