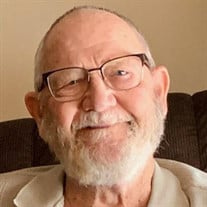 Leon Bernard Govert, 83, of Beloit, Wisconsin, passed away at home surrounded by his loving family on Tuesday, April 5, 2022. He was born on March 25, 1939 in Dyer, Indiana to Alphons and Agnes M. (Stockman) Govert. Leon graduated from Beloit Memorial High School in 1957. After high school, Leon and his brother Walter “Wally” worked at Fairbanks Morse factory and Weiland Well Drilling. With aspirations to start their own company, Leon and Wally worked opposite shifts at Fairbanks Morse in order to open Govert Brothers Well Drilling in 1963. Leon was a lifetime member of the Wisconsin Water Well Association. After Leon’s retirement in 2002, he and his wife, Diana, moved to Cable, Wisconsin and lived there for 15 years. They spent their time in Cable fishing, gardening, canning different jam and jelly, snowmobiling, and hosting friends and family. Leon was an especially talented self-taught wood worker and had his own sawmill and shop and made many beautiful pieces of furniture. Leon became a friend of the American Legion in Cable, WI and made the Missing Man Table and Chair for the legion. Leon and Diana also travelled coast to coast in their motorhome and spent many winters in Arizona. Leon is survived by his wife, Diana Govert of Beloit, Wisconsin; and Carolyn (Bruce) Erickson, the mother of their 3 children, Tammie (Patrick) McGuire of Beloit, Wisconsin, Martin (Pam) Govert of Brodhead, Wisconsin and Rita (Dan) Balis of Brodhead, Wisconsin. Leon also stepped in to be a father to Tammy (John) Naugle of Orlando, Florida, Wendi (Bill) Warke of Beloit, Wisconsin and Terri (Tony) Peacock of Janesville, Wisconsin; 12 grandchildren; 11 great grandchildren; brothers, Richard (Pamela) Govert, Ray Govert, Louis (Karen) Govert and Francis (Terry) Govert; sister-in-law, Donna Govert; and many nieces and nephews. He was preceded in death by his parents; brothers, Gerald (Penny) Govert, Walter (Charlene) Govert and Ralph Govert. A Celebration of Life for Leon will be held at 11:00 a.m. on Monday, April 11, 2022 in the Daley Murphy Wisch & Associates Funeral Home and Crematorium, 2355 Cranston Rd., Beloit, WI. A Visitation of Remembrance will be held from 9:30 a.m. until the time of service on Monday in the funeral home.

Leon Bernard Govert, 83, of Beloit, Wisconsin, passed away at home surrounded by his loving family on Tuesday, April 5, 2022. He was born on March 25, 1939 in Dyer, Indiana to Alphons and Agnes M. (Stockman) Govert. Leon graduated from Beloit... View Obituary & Service Information

The family of Leon B. Govert created this Life Tributes page to make it easy to share your memories.

Leon Bernard Govert, 83, of Beloit, Wisconsin, passed away at...

Send flowers to the Govert family.