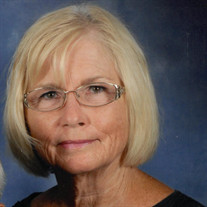 Marcy Lou Olsen, 77, of Beloit, WI, passed away on Sunday, March 28, 2021. She was born on November 4, 1943 in Beloit, the daughter of Herman and Nora (Carpenter) Ross. Marcy was a 1961 graduate of Beloit Memorial High School. She continued her schooling at Beloit College and the University of Wisconsin-Whitewater where she received a Bachelor’s Degree in Education and was a Porter Scholar. Marcy also earned a PhD in Foreign Language. She married Jorgen D. Olsen on January 2, 1965 in Our Savior’s Lutheran church, Beloit. Marcy was formerly employed as an educator for the Janesville School District for 32 years, retiring in 2001. She was the president of the Beloit Snappers Baseball Team for 11 years, a member of the Beloit Memorial High School reunion committee and Our Savior’s Lutheran Church, Beloit. She was proud of her Native American heritage and was a Chickasaw Tribal Member. Marcy was a former volunteer with Beloit Meals on Wheels, the Police & Fire Commission from 1985-1991, Air Fest from 2006-2012, past president of the Snappers Baseball Team from 2004-2008, and a member of the Beloit Boys Baseball Association. Survivors include her husband, Jorgen Olsen of Beloit, WI; children, Matt (Amber) Olsen of Murrieta, CA and Jorgen Jr. “J.D.” (Nikole Ray) Olsen of Beloit, WI; grandchildren, Carson Olsen and James Olsen. Marcy was predeceased by her parents. A funeral service for Marcy will be at 10:30 a.m. on Monday, April 12, 2021 in the Daley Murphy Wisch & Associates Funeral Home and Crematorium, 2355 Cranston Rd., Beloit, WI. Visitation of remembrance will be from 2 to 4 p.m. on Sunday in the funeral home. Burial will be in East Lawn Cemetery. Social distancing and face mask are required. In lieu of flowers, memorials may be made in Marcy’s name to Nightingale's Hospice, 41690 Ivy St. Suite B, Murrieta, CA 92562. Online condolences may be sent to the family at www.daleymurphywisch.com.

Marcy Lou Olsen, 77, of Beloit, WI, passed away on Sunday, March 28, 2021. She was born on November 4, 1943 in Beloit, the daughter of Herman and Nora (Carpenter) Ross. Marcy was a 1961 graduate of Beloit Memorial High School. She continued... View Obituary & Service Information

The family of Marcy Lou Olsen created this Life Tributes page to make it easy to share your memories.

Send flowers to the Olsen family.