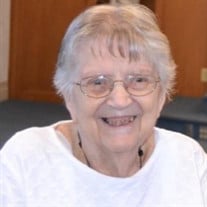 Margaret Irene Armfield, 100, of Beloit, WI, passed away on Wednesday, January 19, 2022 at Autumn Lake Health Care. She was born on December 21, 1921 in Beloit, WI, the daughter of Louis and Loretta (Rouselle) Zinnecker. Margaret was a 1939... View Obituary & Service Information

The family of Margaret Armfield created this Life Tributes page to make it easy to share your memories.

Margaret Irene Armfield, 100, of Beloit, WI, passed away on Wednesday,...

Send flowers to the Armfield family.