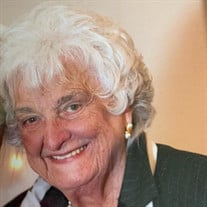 Martha J. Dwyer, 89, of Rockton, IL, passed away on Thursday, October 22, 2020 in Oconomowoc, WI. She was born July 2, 1931 in Beloit, WI, the daughter of George E. and Theresa M. (Sedlatzeck) Smith Sr. Martha grew up in Rockton, graduating from Hononegah High School in 1949 and later earning an Associates Degree from Rock Valley Junior College. She married Richard D. Dwyer Sr. on September 17, 1949 at the Old Stone Church, Rockton, IL. They lived in Roscoe, Il for years before moving back to Rockton. Richard predeceased her on October 14, 2008. In addition to being the mother of five she was gifted artistically, quick witted, funny, athletic, strong, committed and enjoyed many years of being self-employed with Richard. Martha was in business with her husband owning and operating Dwyer Oil Company. She was a member of St. Peter Catholic Church where she sang in the choir, the Rockton Women’s Golf League, and was an Election Judge for Rockton Village. Martha also supported her husband with many of his activities to include the Lyons Club and Rockton Businessmen’s Association. Survivors include her five children, Christine (J.P.) Vyborny of Loves Park, IL, Stephen P. Dwyer of Hampton, VA, David R. Dwyer Sr. of Rockton, IL, Patricia A. (Adam) Zickert of Findlay, OH and Richard D. (Sandy) Dwyer Jr. of Summit, WI; 17 grandchildren; 26 great grandchildren; and her sister, Theresa Link. Martha has left us with many memories and to now be united with her biggest desire her husband “Smiling Dick Dwyer” and our dear Lord again. She was predeceased by her parents, four siblings; brothers-in-law and sisters-in-law. Funeral service for Martha will be 1:30 p.m. Thursday, October 29, 2020 in the Daley Murphy Wisch & Associates Funeral Home and Crematorium, 2355 Cranston Road, Beloit, WI, with Fr. Thomas Doyle officiating. Burial will be in Rockton Cemetery, Rockton, IL. Visitation will be from 12:30 p.m. until the time of service Thursday in the Funeral Home. Social Distancing and face mask are required. A memorial will be established in her name at a later date.

The family of Martha J. Dwyer created this Life Tributes page to make it easy to share your memories.

Send flowers to the Dwyer family.