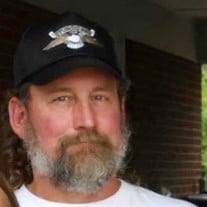 Mike was born on November 15, 1957, to Richard and Patricia (Hendee) Haugan in Beloit, WI. A lifelong Beloit resident, he passed away on December 7, 2021. Mike was widely known in this area, loved by many, and he will be deeply missed. He was known for his extremely generous nature and kind heart. His work ethic was impressive and his gifts were many. Mike's father passed away when he was 15, so he then took on multiple jobs to support his family while still attending school; washing windows in downtown Beloit, trimming trees for Baker Tree Service, and making deliveries for Leath Furniture. After he graduated from Beloit Memorial High School in 1976, he began a 30 plus year career at General Motors in Janesville, with many years spent in the Paint Shop doing Heavy Paint Repair. Mike married the love of his life, Linda Welch, on October 2, 2004 in New Diggings, WI. If Mike and Linda weren't actually together, they were in touch by phone often throughout every day. They created a useful and enjoyable compound on their property and shared it with many who needed car repairs, an ear to listen, or time spent in the shade on their patio that overlooks their petrified wood garden and pond. Their paths had the challenges that make a marriage strong and enduring, with love conquering all. Mike's hobbies were many and included a long involvement with Enduro Racing. With Linda's help, he took the 2006 Points Championship. He loved to travel and explore and they enjoyed a memorable trip to Europe in 2009. After his retirement, they liked to winter in Puerto Vallarta. Not one to sit idle, Mike also continued working for Stateline Cycles, A&H Trucking, and Horizon Farms after his retirement. He was an avid Harley Davidson rider, but he was almost a magician when it came to being a mechanic. If you had car or motorcycle issues, Mike was the guy to know, hands down. He spent many hunting seasons in South Dakota and attended the Sturgis rallys when he could. Mike also looked after his neighbors, and with Linda by his side, he tended their yards in summer and performed diligent snow removal in the winters. They were the neighbors to have if you ever needed anything and Mike made friends wherever he went. Big hearted, generous, storytelling, and capable in so many ways, that was Mike. As his friends and family struggle with this unexpected loss, honor him by being like Mike. Help a neighbor. Do something impactful for a friend. Call or text your wife. Be a decent human being. If he's watching, he'll be amused and telling stories about you in heaven just like he would here on earth. Mike will be deeply missed by his loving wife, Linda, his daughter Jane (Aaron) Lawrence and her children Adrian and Kaidah; beloved little sister Mary (Dave) Carr and their son Chad; Mike shared a special bond with stepson Jacob (Rebecca) Alwin and their children Dylan, Emily and Amy; stepson Lucas (Christine) Alwin and their children Alexander and Sapphire; Aunt Brenda Haugan and her children Lorrie (Charlie) Thatcher and Dan (Sherry) Frei; niece Amber Strait, nephew Steve Strait, and Aunt-in-law Patricia Meierotto. He was predeceased by his mother and father, Richard and Patricia (Hendee) Haugan, special grandmother Kathryn Burow, and his mother's parents, Lavern "LJ" and Ann (Gregus) Hendee. Mike had a well-developed network of loyal friends that also sorrow at his loss. A Celebration of Life will be held at 2 PM on June 25, 2022 at Preservation Park in Beloit, WI. True to form, there will be an alligator BBQ that day, so please bring a dish to pass and your own beverages. Arrive on your motorcycles in your favorite Harley T-shirt or arrive in your American Made Muscle Car. Let's honor Mike - how he lived and who he was. “When a great man dies, for years the light he leaves behind him, lies on the paths of men.” – Henry Wadsworth Longfellow

Mike was born on November 15, 1957, to Richard and Patricia (Hendee) Haugan in Beloit, WI. A lifelong Beloit resident, he passed away on December 7, 2021. Mike was widely known in this area, loved by many, and he will be deeply missed. He was... View Obituary & Service Information

The family of Michael Richard Haugan created this Life Tributes page to make it easy to share your memories.

Send flowers to Michael's Celebration of life will be at.