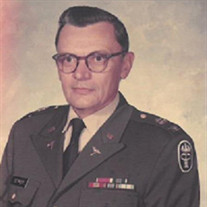 Colonel Milford R. “Bob” Seymour, passed away on Thursday, August 5, 2021 peacefully at home with his family by his side. Bob was born on July 2, 1922 in Madelia, Minnesota, to Clifford and Millie Seymour. He graduated from Iowa State University Veterinary College in 1944 and enlisted in the Army Specialized Training Program. During this time, he met the love of his life, Phyllis, at a ballroom dance in Des Moines, Iowa, where she was serving as an officer in the Women’s Army Corps. They were married on September 12, 1945, raised three beautiful children together and celebrated sixty-seven wonderful years of marriage. Bob continued to serve in the military for twenty-eight years and retired as a colonel. During this time, he completed assignments in Panama, Germany, Korea and additional stateside tours of duty in Iowa, Missouri, Viriginia, Pennsylvania and Texas. His military decorations included the Legion of Merit and the Army Commendation Medal. After his retirement from the military, Bob attended the University of Minnesota, where he earned his Master of Public Health degree. Upon completion of his degree, Bob and Phyllis moved to Beloit, Wisconsin to be closer to their children and grandchildren. He was hired at the city health department in Beloit and then served as the first public health officer for Rock County. He continued to share his passion for learning with others as an environmental health instructor at Blackhawk Technical College. Bob and Phyllis were members of First Lutheran Church in Janesville. They led an active lifestyle together and greatly enjoyed traveling, which included trips to all fifty states, many international trips, winter stays in Texas and participation in Elderhostel educational programs. They volunteered their time at the Senior Center in Janesville and for Meals on Wheels. For his service, Bob earned the State Volunteer Leader of the Year by the AARP in 2005. Bob had a brilliant mind and he truly was a lifelong learner, who always had a book, an iPad, a newspaper or a crossword puzzle in his hands. Above all, Bob will be remembered as a loving husband, father, grandfather and great-grandfather. He is survived by his children, Carol Ann (Kurt) Van Galder, Connie (Gene) Van Galder and Mark (Barbara) Seymour; grandchildren, Christina (Jay) Jensen, Kyle (Heather) Van Galder, Tami (Hamang) Patel, Brian Christensen, Jon Van Galder, Stacy (Timothy) Duffy, Bradley (Amy) Christensen and Kimberly (Mitch) Johnson; and fourteen great grandchildren. Bob was predeceased in death by his wife, Phyllis and his parents, Clifford and Millie. His family extends their heartfelt appreciation to the caregivers from Home at Ease, the staff at Mercy Hospital and the staff at Beloit Regional Hospice. A private family service will be held to celebrate his life. Daley Murphy Wisch & Associates Funeral Home and Crematorium, 2355 Cranston Rd., Beloit, WI assisted the family with arrangements. In lieu of flowers, memorial contributions may be given to First Lutheran Church in Janesville, the Alzheimer’s Association and Beloit Regional Hospice.

Colonel Milford R. &#8220;Bob&#8221; Seymour, passed away on Thursday, August 5, 2021 peacefully at home with his family by his side. Bob was born on July 2, 1922 in Madelia, Minnesota, to Clifford and Millie Seymour. He graduated from Iowa... View Obituary & Service Information

The family of Milford "Bob" R. Seymour created this Life Tributes page to make it easy to share your memories.

Send flowers to the Seymour family.