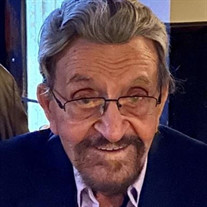 Paul J. Milatzo, 99, of Janesville, WI, passed away from natural causes on Saturday, November 27, 2021. He had been a resident of Cedar Crest Retirement Community since August 2015. He was born on March 27, 1922, in South Beloit, IL the son of John and Alberta Milatzo. Paul attended South Beloit public schools until high school when he enrolled in Beloit Memorial High School in order to join the R.O.T.C. and eventually the Army National Guard. Following his high school years, he worked at Fairbanks Morse and Co. as a payroll clerk until September 1942 when he enlisted in the Army. He was stationed at Camp McCoy in Monroe County, WI, for the duration of his enlistment. On February 12, 1944 he married the love of his life, the former Vita Lucille Farina of Beloit, WI at St. Paul Catholic Church. Paul began his career in the dry-cleaning business by first joining Peerless Cleaners, then moved on to Boston Cleaners and Wardrobe Cleaners, all in Beloit. These opportunities enabled him to learn the dry-cleaning business from the ground up. Along the way, he took courses in chemistry at Rockford College to round out his knowledge and skills in the technical side of the business. In 1955 he bought Beloit Cleaners on Broad Street which he operated successfully until 1962. In that year, he was offered the opportunity to manage the “One Hour Martinizing” store on West Grand Avenue. A franchise group out of Kentucky was seeking to expand their footprint in Beloit and were looking for an experienced dry cleaner to manage and grow the franchise locally. Paul was very successful at growing the “Martinizing” business from one store to three stores by the mid-1960s. In April 1967 he moved to Akron, OH to again play the lead role in expanding and growing the “Martinizing” business with his partners in the Akron area. He and his wife retired in 1990 and spent several years enjoying golf and travel while living in Bradenton, FL. Among Paul’s many talents and interests were carpentry and music. In 1948, along with his father and friends, he built their first home on South Park Avenue in South Beloit, IL. He also applied his skills in remodeling by converting attics and basements to livable spaces for family and friends. Growing up in a musical family and being multi-talented in the guitar, piano and violin, his first love was singing. While in Beloit he joined the local chapter of the (SPBSQSA) barbershop singing chorus and maintained active membership in chapters in Beloit, Akron and Bradenton, FL. In 2003, he and his wife moved back to the Janesville, WI area to be closer to family and relatives. He was a member of Our Lady of the Assumption Catholic Church. He was predeceased by his wife Vita in 2006 and sisters, Angeline (Mike) Piccione and Mary (Carl) Latino. He is survived by his children, John (Marsha) of Chantilly, VA and Joanne Kutter of Edgerton, WI; grandchildren, Brennon Kutter of Madison, WI, Nicole (Joe) Donny of Verona, WI, Maggie (Louis) Milatzo of Hoboken, NJ, Jillian (Tom) Gadell of Chantilly, VA, and Gina Milatzo of Boston, MA; nine great grandchildren; and several nieces. A Funeral Mass of Christian Burial for Paul will be held at 12:00 p.m. on Thursday, December 2, 2021 in Our Lady of the Assumption Catholic Church, 2222 Shopiere Rd., Beloit, WI. Entombment will be in Mt. Thabor Cemetery. Visitation of Remembrance will be held from 11:00 a.m. until the time of service Thursday in the church. Daley Murphy Wisch & Associates Funeral Home and Crematorium, 2355 Cranston Rd., Beloit, WI assisted the family with arrangements. In lieu of flowers, memorials may be made in his name to the Shriners Children’s Hospital or to Our Lady of the Assumption Catholic School.

Paul J. Milatzo, 99, of Janesville, WI, passed away from natural causes on Saturday, November 27, 2021. He had been a resident of Cedar Crest Retirement Community since August 2015. He was born on March 27, 1922, in South Beloit, IL the son... View Obituary & Service Information

The family of Paul Milatzo created this Life Tributes page to make it easy to share your memories.

Paul J. Milatzo, 99, of Janesville, WI, passed away from natural...

Send flowers to the Milatzo family.