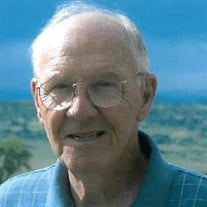 Ralph M. Irvin, 98, of Beloit, WI passed away on the evening of Sunday, September 19, 2021 in his apartment at Riverside Terrace, following a brief illness. He was born in Granite City, Illinois on December 17, 1922, the son of Ralph A. and Walda (Muench) Irvin. Ralph had two sisters, Iva Nelson and Joyce Kahtz. He married Ruth Lucille Robertson of Appleton, Wisconsin, in 1948. Both Ralph and Ruth spent their careers in education, and were married after meeting as teachers at Roosevelt Junior High. Ruth passed away in 2008. Ralph grew up in Edwardsville, Illinois, and also lived in Granite City, Illinois, St. Louis, Missouri, Indianapolis and Logansport, Indiana. After graduating from high school in Edwardsville in 1940, he attended Eastern Illinois State Teacher’s College in Charleston, Illinois. His education was interrupted by World War II, and in 1944 he volunteered and was inducted into the US Army Air Force. While in the service, as a First Lieutenant, he was a navigator and served on flights all over the world, including many flights to the Pacific, Asia and Africa. After World War II, he left the service and returned to get his Bachelor of Science degree in education from Eastern Illinois in 1947. While at Eastern Illinois, he also played football as a receiver and tennis, where he earned his nickname “Ace.” He received his Master of Science degree in physical education from the University of Wisconsin-Madison in 1961 and took additional graduate courses throughout his career. He began his teaching career in 1947 at Roosevelt Junior High School in Beloit, where he taught physical education and geography, coached football and other sports, and later became a school counselor at Roosevelt, and then at Aldrich and Beloit Memorial High School. He retired, as did his wife Ruth, in 1987. During the summers of 1955 to 1962, Ralph managed the City of Beloit’s swimming pools. He was actively involved in many professional and civic organizations, including the Beloit Education Association, Wisconsin Education Association, Southern Wisconsin Education Association, Beloit Area Retired Teachers Association and Noon Kiwanis Association. With the Kiwanis, he was actively involved in one of their programs which was designed to help students improve their grades. As part of that, he went into middle schools to present awards to students who successfully brought up their grades. He did that well into his nineties. He was a lifetime member of River of Life Methodist Church. Ralph was predeceased by his wife, Ruth (Beloit); parents (Edwardsville, Illinois); sisters, Iva Nelson and Joyce Kahtz (Edwardsville, Illinois and Cape Girardeau, Missouri); and nephew, David Nelson (Edwardsville, Illinois). Survivors include his children, Robert (Shirley) Irvin of Castle Rock, Colorado and Bette (Cleveland) Carr of Beloit, Wisconsin; grandchildren, Marisa (Marques) Flowers of Madison, Wisconsin, Chris (Evelyn Castro) Carr of Long Beach, California, Jason (Jodie) Chaney of Littleton, Colorado and Juliet (Zeke) Reardon of Parker, Colorado; great grandchildren, Mariah Ortega Flowers, Travion, Destiny and Tierra Flowers of Madison, Wisconsin, Camila Rose Carr of Long Beach, California, Joshua and Brayden Chaney of Littleton, Colorado, and Graham, Beck and Berkley Reardon of Parker, Colorado; sister-in-law, Dorothy Griffith of Wautoma, Wisconsin; and multiple nieces and nephews. The family wishes to thank the Riverside Terrace staff and the Beloit Regional Hospice staff for their kindness and caring shown to Ralph and the family. A Celebration of Life will be conducted for Ralph at 1:00 p.m. on Tuesday, September 28, 2021 in the Daley Murphy Wisch & Associates Funeral Home and Crematorium, 2355 Cranston Rd., with Rev. Gene Van Galder officiating. Social distancing and face masks are required. The family requests no flowers be sent. Memorials may be sent to Beloit Regional Hospice, River of Life Methodist Church, or Noon Kiwanis.

Ralph M. Irvin, 98, of Beloit, WI passed away on the evening of Sunday, September 19, 2021 in his apartment at Riverside Terrace, following a brief illness. He was born in Granite City, Illinois on December 17, 1922, the son of Ralph A. and... View Obituary & Service Information

The family of Ralph M. Irvin created this Life Tributes page to make it easy to share your memories.

Send flowers to the Irvin family.