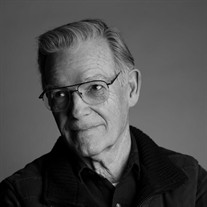 Ralph W. Tuttle, 85, of Beloit, WI, died Thursday, January 7, 2021 in Mercy Hospital, Janesville, WI. The Tuttle family was one of the first settlers in the Beloit area in 1835. Ralph was born September 20, 1935 and raised on the family farm in South Beloit, IL, the son of Roy E. and Florence (Hendee) Tuttle. Ralph received his GED from Blackhawk Technical College. He was a veteran of the U.S. Marine Corp. Ralph married Edna Joyce Hahn on October 5, 1957 in Beloit, WI. Ralph was employed by General Motors for 30 years, retiring in 1988. He also had part time jobs as a bottle gas route driver and carpet cleaner. Ralph was a very active member of the Beloit Free Methodist Church. He enjoyed going to the Tuttle family cabin in Montello, WI, when his children were younger and then to their destination camper in Stoughton, WI. He also enjoyed going to the Sky Lodge Church Camp. Ralph participated in the Vets Roll. Ralph was an avid Green Bay Packer fan and was an accomplished softball pitcher until the age of 75 as a participant in the Beloit City Church League. He was the winning pitcher when they won the City Tournament. Ralph became a Christian in 1962 and has served the Lord faithfully until his death. He was a Sunday school teacher for 42 years at the Free Methodist Church and was known to lead his fellow Christians in prayer and scripture when Pastor was not available. Survivors include his wife of 63 years, Edna Tuttle of Beloit, WI; children, Wendy (David) Karr of Afton, WI, Laurie Tuttle, Michael (Janean) Tuttle both of Beloit, WI, and Brenda (Geron) Van Tine of Pekin, IL; grandchildren, Matthew (Dana) Kimball, twins, Aaron (Heather) Kimball and Eric (Jodi) Kimball, Caleb Kimball, Elizabeth (Ben) Ruzick, Nicholas (Katie) Tuttle, Thomas (Jessica) Tuttle, Lance (Jeri) VanTine, Joel (Taylor) VanTine and Brandon VanTine; 17 great grandchildren and one on the way; twin brother, Raymond (Alice) Tuttle; sister, Alice Richards; numerous nieces and nephews. He was predeceased by his parents, brother, Alvin Tuttle; sisters, Ruby Gregus and Barbara Shipler-Stout; sister-in-law, Dorothy Tuttle and brother-in-law, Ward Richards. Funeral service for Ralph will be at 1:00 p.m. Friday, January 15, 2021 in the Daley Murphy Wisch & Associates Funeral Home and Crematorium, 2355 Cranston Road, Beloit, WI, with Reverend Rich Whippler officiating. Entombment will be in Floral Lawn Mausoleum. Visitation of remembrance will be from 4 to 7 p.m. Thursday in the funeral home. Social distancing and face mask are required. Memorials may be given in his name to the Sky Lodge Christian Camp, Montello, WI.

Ralph W. Tuttle, 85, of Beloit, WI, died Thursday, January 7, 2021 in Mercy Hospital, Janesville, WI. The Tuttle family was one of the first settlers in the Beloit area in 1835. Ralph was born September 20, 1935 and raised on the family farm... View Obituary & Service Information

The family of Ralph W. Tuttle created this Life Tributes page to make it easy to share your memories.

Send flowers to the Tuttle family.