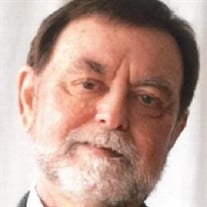 Ray David Melby, 72, of Beloit, WI, passed away on Tuesday, April 5, 2022 in his home. He was surrounded by his family, with his sweet dog Khloe at his side. He was born on October 11, 1949 in Richland Center, WI, the son of Ray and Martha (Hopper) Melby. He married Linda Westedt on September 12, 1970 in Belvidere, IL. He was a 1968 graduate of Beloit Memorial High School. Ray was formerly employed by Beloit Corporation until his retirement in 1986. He later received a degree in computer programing from Blackhawk Technical College. He was a member of Our Saviors Lutheran Church, a lifetime member of the Beloit Rifle Club, and the NRA. Ray loved fishing, hunting and just being out in the woods. He spent many hours shooting black powder, and primitive camping at Rendezvous around the area. He also loved the Green Bay Packers, he cheered them on win or lose. Most of all he loved his time with his family, friends and his dog Khloe. He cherished the moments he had with them. He is survived by his wife, Linda; son, Travis (Lang) Melby of Tacoma, WA; daughter, Jessica (Jason) Eisenmenger of Madison, WI; grandson, Trey (Jeanaci) Brown; brother, Stan Melby of Lawton, OK; brother-in-law, Wayne Westedt; sister-in-law, Jill Michels; nieces and nephews, Krys (Alex) Levinson, Brian Melby and David (Melissa) Michels; lifelong friends who became family, Russel (Leslie) Quiggle, their daughter, Carrie (Marcus) Spitzmiller, and their grandchildren, Katie and Ryan; good friends, Ed Lange and Harley Whitt; and his beloved companion, Khloe. He was predeceased by his parents, Ray and Martha Melby; his in-laws, Walter and Lois Westedt; sister-in-law, Mary Jo Melby; special cousins, Glen Melby and Donna Ahrens; best fishing buddy, Louie Ohland; his furry companions, Hershey, Taffy and Abbey. A Memorial Service for Ray will be held at 1:30 p.m. on Thursday, April 14, 2022 at Daley Murphy Wisch & Associates Funeral Home and Crematorium, 2355 Cranston Rd., Beloit, WI. Visitation of Remembrance will be held from 12:00 p.m. until the time of service Thursday in the funeral home. The family would like to thank the University of Wisconsin Transplant Team and the Vascular Team for the excellent care they have given Ray for many years.

Ray David Melby, 72, of Beloit, WI, passed away on Tuesday, April 5, 2022 in his home. He was surrounded by his family, with his sweet dog Khloe at his side. He was born on October 11, 1949 in Richland Center, WI, the son of Ray and Martha... View Obituary & Service Information

The family of Ray David Melby created this Life Tributes page to make it easy to share your memories.

Send flowers to the Melby family.