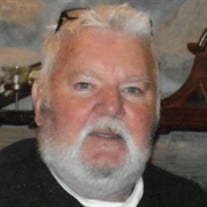 Raymond Clark Darnell, 78, of Rockford, IL, died on Thursday, April 1, 2021 in Memorial Medical Center, Las Cruces, NM. He was born on August 30, 1942 in Paul’s Valley, OK, the son of Calvin and Lorraine Darnell. Lorraine later married Lawrence (Larry) Anderson, who raised Ray as his own son. Ray was a 1961 graduate of Hononegah High School, Rockton, IL. He was a veteran serving with the U.S. Marines from 1961 until 1967. Ray married Lynn Bernstein on October 26, 1968 in St. Jude Catholic Church, Beloit, WI. She predeceased him on October 17, 1996. Ray was employed for 20 years by Kroger Grocery as a butcher and later was self-employed for 20 years as a chef. In his younger years, he enjoyed running and bike riding. Ray was an avid Green Bay Packer fan through the good times and bad – he never had a bad thing to say about the Packers. He was also an Indy 500 fan and traveled to Indianapolis to watch the race every year for over 45 years. Over the years many family members and friends made the trip with him. It was a dream of Ray’s to live in a warmer climate and he fulfilled that dream by buying a camper and living in New Mexico the last few years. He enjoyed meeting people and making friends wherever he went and always seemed to find a fellow Packer Fan. Ray was a former member of St. Jude Catholic Church. Survivors include his brother-in-laws, Nick Garetson of Orfordville, WI; Roy Nelson, Beloit, WI; special nieces, Tippy (Chris) Phillips, Jodi (Dusty) Anderson, Kathryn (Odis Tinder) Lawver, and Kimberly (David) Garcia; special nephew, Todd (Sara) Nelson; 13 great nieces and nephews, several cousins and many friends. He was predeceased by his parents; sister, Glenna Sue Garetson; sister-in-law, Karen Nelson. Services for Ray will be at 10:30 a.m. on Wednesday, April 14, 2021 in the Daley Murphy Wisch & Associates Funeral Home and Crematorium, 2355 Cranston Rd., Beloit, WI, with Fr. Michael Resop officiating. Burial will be in Rockton Cemetery with Military Honors Accorded by the Rockton American Legion Post #332.

The family of Raymond C. Darnell created this Life Tributes page to make it easy to share your memories.

Send flowers to the Darnell family.