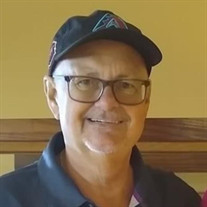 Rex Alan Baker, 68, of Phoenix, AZ, and formerly of Rockton, IL, died on Tuesday, April 20, 2021 after a long struggle with congestive heart failure. He was born on November 20, 1952 in Beloit, WI to Cody and Marie Baker. As the only child, he was the center of attention and the apple of his parent's eye. In 1964, at the age of eleven, his parents died in a car accident and he was then cared for by his grandmother Iva Baker. He was a 1970 graduate of Hononegah High School in Rockton, IL and soon after graduated from Rockford Barber College in September of 1971. Rex enjoyed working as a barber for many years, while he also had a long career as Director of Facilities at the YMCA in Scottsdale, AZ and Dallas, TX. With a deep love for classic cars with loud, fast engines, Rex spent his youth cruising with his lifelong best friend, Tony Schiro, and in later years visiting car shows and museums to talk with fellow car enthusiasts. Rex enjoyed live music and went to concerts often, his favorites being classic rock and country music. His sense of humor was widely admired in his extensive network of friends, his laughter freely given and love easily earned. His loss is deeply felt by the many who loved him and enjoyed his company. Rex is survived by his children; daughters, Jessica Baker of York, PA, Christina Baker and Helena Baker both of Phoenix, AZ; sons, Mathew Baker, Marcus Baker and Nathan Baker all of Phoenix, AZ and Jeremy Alan (Rana) Wood of South Beloit, IL; granddaughters, Emma Schmidt of Phoenix, AZ and Maddison Wood of South Beloit, IL; cousins, Toni Pini, Faye Merdian, Brian and Scotty Travers; best friend of over 51 years, Tony (Melonie) Shiro and family of Belvidere, IL; other relatives and friends including, Karlsson Roth of Prescott, AZ, his caring neighbors, and everyone at the Ole’ Brass Rail in Phoenix. He is predeceased by his parents; son, Chad Baker; aunts, Alice and Cecilia; and cousin, Gail. A Visitation of Remembrance for Rex will be from 12:00 p.m. until 2:00 p.m. on Sunday, May 2, 2021 in the Daley Murphy Wisch & Associates Funeral Home and Crematorium, 2355 Cranston Rd., Beloit, WI. Rex will be laid to rest with his parents at a later date. Social distancing and face masks are required.

Rex Alan Baker, 68, of Phoenix, AZ, and formerly of Rockton, IL, died on Tuesday, April 20, 2021 after a long struggle with congestive heart failure. He was born on November 20, 1952 in Beloit, WI to Cody and Marie Baker. As the only child,... View Obituary & Service Information

The family of Rex Alan Baker created this Life Tributes page to make it easy to share your memories.

Send flowers to the Baker family.