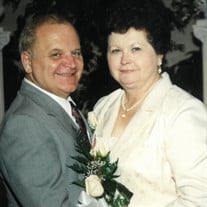 Myrna J. Susedik, 75, of Beloit, WI, died on Wednesday, October 20, 2021 in her home and Robert G. Susedik, 77, died on Thursday, October 21, 2021 at Mercy Hospital, Janesville. Myrna was born on December 11, 1945 in Durand, WI, the daughter of Sidney and Elfa (Gross) Johnson. She was a 1964 graduate of Beloit Memorial High School. Robert was born on May 1, 1944 in Sheboygan, WI, the son of Frank and Leona (Bredeson) Susedik. He was a 1962 graduate of Beloit Memorial High School. Robert and Myrna were married on June 19, 2001 in Las Vegas, NV. Myrna was employed by Alliant Energy. She loved going to local plays and spending time with her friends and family, especially her great granddaughter, Charlee. Robert was employed by Chrysler. He enjoyed watching the History and Discovery Channels. They both enjoyed going to the Grand Slam Bar aka “the office”, playing video poker machines, and going to the Tilley’s Ballyhoo Tavern. They also enjoyed traveling to Las Vegas and Reno and were avid Green Bay Packer fans. Survivors include Myrna’s daughter and Robert’s stepdaughter, Brenda (John) Amborn; grandchildren, Amanda Marshall and Christopher (Ashlee) Amborn; great grandchildren, Charlee Marshall and Bowen Amborn; Myrna’s brothers, Calvin (Marlene) Johnson and Gary (Maritta) Johnson; many nieces and nephews. They were predeceased by their parents; Myrna’s brother, Ronnie (Jude) Johnson; and Robert’s brother, John Bredeson. Funeral Services for Robert and Myrna will be at 11:00 a.m. on Thursday, October 28, 2021 in the Daley Murphy Wisch & Associates Funeral Home and Crematorium, 2355 Cranston Rd., Beloit, WI. Visitation of remembrance will be from 10 a.m. until the time of service Thursday in the funeral home.

The family of Robert and Myrna Susedik created this Life Tributes page to make it easy to share your memories.

Send flowers to the Susedik family.