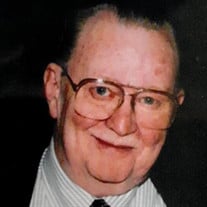 Robert M. Egleston, Beloit, WI passed away peacefully at home on Friday, October 22, 2021. The son of William and Catherine (Callen) Egleston. Robert was born in Beloit, WI on September 25, 1936. He was a lifelong resident of Beloit. He graduated from Beloit Memorial High School in 1955. Upon graduation he enlisted in the U.S. Air Force serving around the world for 4 years, primarily in Japan, as a Radar Maintenance Technician. After being honorably discharged, Bob returned to Beloit and began employment at Fairbanks Morse as a Technical Writer. Later he worked at Ecolab as a Field Technician, finishing his carrier with Watkins Security. Bob is survived by his wife, Carol; son, Patrick (Beloit); daughter, Janice (Beloit); grandchildren, Aaron Sutherland (Beloit), and Daniel Lancaster (Beloit); great-grandson, Tyler Benevides; brother-in-law, Ken (Sheila) Druetzler; sister-in-law, Patricia Druetzler; many nieces and nephews; and great nieces and nephews. Bob is predeceased by his parents; sister, Clara (Billie) Geiselhart; and brother-in-law, Warren Druetzler. Bob married his high school sweetheart, Carol Druetzler, on April 16, 1960. He was a lifelong member of the First Baptist Church of Beloit where he served as a Sunday school teacher, church van driver for many years, member of 3M and the dart ball team. He was a member of the Beloit Moose Lodge #91. He was involved in the Boy Scouts as a youth, and also in the Cub Scouts with his son Patrick, and enjoyed going to his grandson, Daniel’s scouting events as well. Bob and Carol enjoyed camping and square and round dancing with the Petunia City Square Dancing Club. During their retirement they enjoyed a cruise to Alaska. An “Eastern Odyssey” trip to the eastern Unites States visiting Amish Acres, Shaker Village and Washington D.C., “Patriot’s Tour” to Philadelphia, PA, New York, NY & Boston, MA and a trip to Lexington, KY to the Kentucky Horse Park, they also visited Branson, MO. The family would like to thank Pastor Walt Hoshaw, First Baptist Church of Beloit, Beloit Regional Hospice, Hospice Nurse, Haley and Chaplain Mark Maxted. A Memorial service for Bob will be held at 12:00 p.m. on Saturday, November 6, 2021 in the First Baptist Church, 617 Public Ave., Beloit, WI. Visitation of Remembrance will be held at 10:45 a.m. until 11:45 a.m. Saturday in the church. In lieu of flowers memorials in his name may be made to First Baptist Church Building Funds or Beloit Regional Hospice.

Robert M. Egleston, Beloit, WI passed away peacefully at home on Friday, October 22, 2021. The son of William and Catherine (Callen) Egleston. Robert was born in Beloit, WI on September 25, 1936. He was a lifelong resident of Beloit. He graduated... View Obituary & Service Information

The family of Robert M. Egleston created this Life Tributes page to make it easy to share your memories.

Send flowers to the Egleston family.