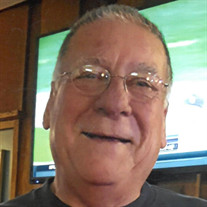 Robert “Bob” M. Fick, 73, of Rockton, IL, died after a short battle with cancer on Friday, February 5, 2021 at home with his wife by his side. He was born in 1947 to Edwin and Jenaine (Kellogg) Fick in Beloit, WI. Bob was a 1964 graduate of Beloit Memorial High School. He married Lonna L. Fink on July 17, 1999. Bob was employed by Ingersoll in Rockford, IL and retired after 34 years. He was a die-hard Green Bay Packer fan, Wisconsin Badger fan, and Chicago Cubs fan. He enjoyed his cruises in his Saturn Sky and was known by most younger generations as “Big City” for his remarkable talent on the pool table. Survivors include his wife, Lonna Fick and loving Yorkshire Terrier, Maxx; three children by a previous marriage, Robert (Jodi) Fick, Brian (Darla) Fick, and Cherie (Mike) Mauerman all of Beloit; six grandchildren, Zachary and Ashley Mauerman, Cody (Tara) Fick, Jordan (Kayla) Fick, Kaylee and Kirk; three great grandchildren, Valerie, Liam, and Aiden; nephew, Bill (Lisa) Peterson of Clinton, WI; father-in-law, Merlin “Pete” Staskal; sisters-in-law and brothers-in-law, Janice Schultz, Jeff Staskal, Ronald Dick, and Jim (Connie) Dick; several great nieces, nephews, other relatives and friends. Bob was predeceased by his parents; sister, Sandi Peterson; nephew, Timothy Peterson; and mother-in-law, Patricia Staskal. The family would like to give a special thank you to MercyHealth at Home Hospice for their caring support and cousin Barb Paul for being there. Per Bob’s request, there will be no services. Memorials may be given in his name to your local Hospice center. A celebration of life will be at a later date when we can be outside. Daley Murphy Wisch & Associates Funeral Home and Crematorium, 2355 Cranston Road, Beloit, WI, assisted the family with arrangements. Online condolences may be sent to the family at www.daleymurphywisch.com

The family of Robert M. Fick created this Life Tributes page to make it easy to share your memories.

Send flowers to the Fick family.