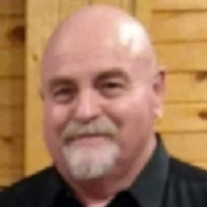 Robert A. Norman, 71, of Beloit, WI, passed away on Sunday, August 22, 2021 at St. Mary’s Hospital, Madison, WI. He was born on December 15, 1949 in Nashville, TN, the son of Aubrey and Patricia (Dahl) Norman. Robert was a 1968 graduate of South Beloit High School. He married Holly (Perry) Norman on June 17, 2006 in the Second Congregational Church, Beloit. Robert was employed by CP Rail for 45 years. He was an avid weightlifter, had a personal best bench press of 540 pounds and won many awards. Robert opened The Gym on State St. in downtown Beloit from 1976 to 1979. He was a bouncer for many Beloit establishments. Robert was an avid Chicago Bears and Wisconsin Badgers fan. Survivors include his wife, Holly Norman; daughter, Heather Norman; grandchildren, Brody and Logan Norman and Dominic Wobig; step daughters, Sarah and Lisa Wobig; mother of his children, Debra (Pfaff) Hoekman; three sisters, Holly (Jim) Bindl, Kathy Odom and Barbara (Kenny) Cliffe; brother, Jean Norman; aunt, Mary Meister; and many nieces, nephews and cousins. Robert was predeceased by his parents; son, Robert Norman II in 2015; and two brothers, Terry and Michael Norman. A Funeral Service for Robert will be held at 2:00 p.m. on Saturday, August 28, 2021 in the Daley Murphy Wisch & Associates Funeral Home and Crematorium with Reverend Dan Herman officiating. Burial will be in Rockton Cemetery. Visitation of Remembrance will be held on Friday, August 27, 2021 from 5:00 p.m. until 7:00 p.m. in the funeral home.

The family of Robert A. Norman created this Life Tributes page to make it easy to share your memories.

Send flowers to the Norman family.