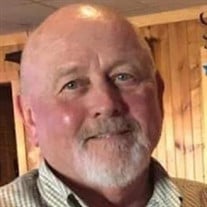 Robert Wayne “Bob” Turner, 74, passed away on Tuesday, December 14, 2021 peacefully in his home surrounded by his family. Bob was born on July 7, 1947 in Beloit, WI, the son of Ivan and Alma (Helwig) Turner. He was a 1965 graduate of Beloit Memorial High School. Bob was drafted into the United States Army in 1966 and was honorably discharged in 1972. Bob married Vivian Johnson on September 27, 1969 and together they raised three children. Bob was formerly employed by Beloit Corporation for 26 years. He was a material operator for Fairbanks Morse until his retirement in 2013. Bob was a member of the Eagle’s Club, Newark Gun Club, NRA and the Good Old Boys Golf Club. He was an avid Green Bay Packers Fan. Bob enjoyed fishing, hunting, golfing and a nice cold beer with friends. He loved spending time with his children and grandchildren and kept up with all of their activities. His dog Mya gave him many years of faithful companionship. Survivors include his children, Leslie Jones, Shannon Turner and Rick (Sarah) Turner all of Beloit, WI; grandchildren, Hunter (Macey) Jones, Dakota (Tara) Jones, Braden Turner and Lily Turner; son-in-law, Brian Jones of Beloit, WI; daughter-in-law, Bridget Turner of Beloit, WI; sister, Marilyn Cahill of Gilbert, AZ; several nieces, nephews, great nieces and nephews; other relatives and friends. Bob was predeceased by his parents and brother, Jack Turner. The family would like to give a special thank you to his lifelong friend, Jim Mounts and special friend, Mike Williams. A Funeral Service for Bob will be held at 10:30 a.m. on Monday, December 20, 2021 in the First Congregational Church, 801 Bushnell St., Beloit, WI, with Rev. Gene Van Galder officiating. Burial will be in Floral Lawn Cemetery. Visitation of Remembrance will be held from 6:00 p.m. to 8:00 p.m. on Sunday, December 19, 2021 in the Daley Murphy Wisch & Associates Funeral Home and Crematorium, 2355 Cranston Rd., Beloit, WI.

The family of Robert W. Turner created this Life Tributes page to make it easy to share your memories.

Send flowers to the Turner family.