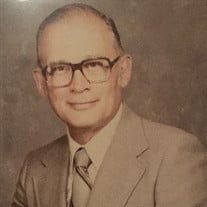 Robert E. Zier, 92, of Manchester, MO. passed away on Sunday, April 11, 2021 at home surrounded by his loved ones. He was born on January 12, 1929 in Shannon, IL., the son of Arthur and Bernice Zier. He married Mary on October 23, 1948 in Beloit, WI. They called Beloit home until 1973, when Robert and Mary would relocate to St. Louis, MO. and stayed there until time of his passing. Meanwhile always calling Beloit home. Robert as a young man would serve his country as a Marine. Upon his return to Beloit, he would contribute to his community as a volunteer firefighter and part time police officer for the Township of Beloit. Meanwhile he would be a lifelong Mason at Masonic Lodge here in Beloit, WI. Later relocating to St. Louis, MO., he would become Chief of Security over the two Chrysler automobile plants in Fenton, MO. With a passion for flying planes from a very early age, he would continue to be an active pilot throughout his life. He also worked as a college professor teaching aviation for many years. Robert became an accomplished photographer with an extensive portfolio. He would regularly show and sell his work. After retiring from Chrysler Automobiles and teaching, Robert and his wife Mary opened the Firehouse Gallery and Antiques in Eureka, MO. They would be business owners for more than 15 years. The business’s focus was on custom picture framing and specializing in antique firefighter memorabilia. He enjoyed attending his grand & great grandchildren's baseball games and being outdoors whenever possible. Robert loved his family and was a born leader that led by example in everything he did in life. This man had the best handshake. It was there even in his final days. He will be missed by many and never forgotten. His wife, Mary Zier predeceased him on May 27, 2006. His son, Thomas Zier predeceased him on January 29, 2007. Survivors include his children, Roberta “Bobbie” Fiske (James) of Beloit, WI., and Melissa Jones Copeland (William) of Manchester, MO.; seven grandchildren, Shannon Fiske, Cody Jones, Joshua Jones, Casey Jones, Caleb Jones, Nate Zier, and Alec Zier, also ten great grandchildren. A private family service will be held. Daley Murphy Wisch & Associates Funeral Home and Crematorium, 2355 Cranston Rd., Beloit, WI assisted the family. Burial will be in East Lawn Cemetery. Online condolences may be sent to the family at www.daleymurphywisch.com

The family of Robert E. Zier created this Life Tributes page to make it easy to share your memories.

Send flowers to the Zier family.