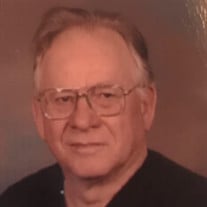 Ronald Douglas Anderson of Beloit, WI, passed away surrounded by his family on Thursday, March 17, 2022 at the age of 92. Ron was born on December 4, 1929 in Beloit, WI, the first of two children of Harold and Blanche (Bucholtz) Anderson. After graduating from Beloit Memorial High School in 1948, he served four years in the United States Navy and then went on study electronics at DeVry Technical School in Chicago, IL. After completing his education, he worked with his father at Anderson Electric in the mornings and repaired TVs at night. He also worked as the Electrical Inspector for the City of Beloit for over a decade and retired from there in 2000. Ron met his wife of 68 years, Joyce, in Chicago and got married in 1954 and had four beloved children. After his retirement, Ron and Joyce took their first of two trips to Turkey and found joy in travel. They also enjoyed cruises in the Caribbean and Germany amongst other locations. Ron was a skilled woodworker and found great satisfaction in his many hobbies. He was often found in his workshop creating beautiful stained-glass artwork or working in the garden. Ron and Joyce were members of the Petunia City Square Dance Club and treasured the friendships that were made. Ron’s incredible skill, creativity and determination led him to transform a mobile home and reclaimed wood into a two-story cabin that served as a peaceful retreat for family and friends. Ron was a loyal and dedicated husband, friend, father, grandfather and great grandfather. He was a member of Central Christian Church, led his family in prayer before each holiday dinner, and found great comfort in his church. Ron’s dry sense of humor lasted through his final days. His signature Anderson grumbles will be remembered and imitated by family and friends for years to come. Ron was also a member of the Masonic Morning Star Lodge #10 F. & A.M. Ron was predeceased by his parents, Harold and Blanche Anderson and sister, Darlene Rath. Ron is survived by his loving wife, Joyce; four children, Douglas Anderson, Danny (Donna Jensen) Anderson, Robin (Dan) Stauffacher and Randi Bull all of Beloit, WI; grandchildren, Derek Anderson, Bryce Anderson, Kendall Christidis, Teddy Anderson, Kelsey Stauffacher, Jeremy Bull, Elizabeth Anderson, Clinton Anderson, Andrew Bull and Spencer Anderson; and 11 great grandchildren; nieces, nephews, other relatives, and friends. Ron’s family would like to thank the doctors and staff at Beloit Memorial Hospital who treated Ron and his family with great care, and would like to thank Austin for being the best neighbor and friend to Ron and Joyce. A Funeral Service for Ronald will be held at 1:00 p.m. on Tuesday, March 22, 2022 at Central Christian Church, 2460 Milwaukee Rd., Beloit, WI. Entombment will be held in Floral Lawn Cemetery. Visitation of Remembrance will be held from 11:00 a.m. until the time of the masonic service at 12:45 p.m. Tuesday in the church. Daley Murphy Wisch & Associates Funeral Home and Crematorium, 2355 Cranston Rd., Beloit, WI, assisted the family with arrangements. Memorials in his name may be given to Central Christian Church.

Ronald Douglas Anderson of Beloit, WI, passed away surrounded by his family on Thursday, March 17, 2022 at the age of 92. Ron was born on December 4, 1929 in Beloit, WI, the first of two children of Harold and Blanche (Bucholtz) Anderson. After... View Obituary & Service Information

The family of Ronald D. Anderson created this Life Tributes page to make it easy to share your memories.

Send flowers to the Anderson family.