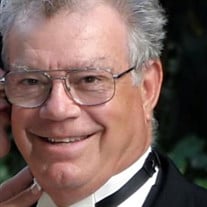 Ronald “Pete” Rockers, 80, of Roscoe, IL, passed away peacefully on Monday, September 6, 2021 in his home surrounded by his loving family. He was born on March 5, 1941 in Beloit, WI, the son of Walter and Genevieve (Jones) Rockers. Pete was a 1959 graduate of Beloit Catholic High School. He was a veteran of the United States Navy. Pete married Kay Jensen on May 12, 1973 in St. Peter’s Catholic Church, South Beloit, IL. Pete was formerly employed by Wilson Electric for many years, retiring from Morse Electric in 2003. He was a Knights of Columbus 4th Degree Member of Msgr. Joseph E. Hanz Assembly Council #1209. Pete was a member of the Beloit Horseshoe Club. He was a strong union man. Pete loved outdoor activities and hunting for raccoon and deer. He was known for his gardening skills and would give his watermelon and tomatoes to those who donated canned goods. Survivors include his wife, Kay; son, Nicholas Rockers; daughter, Jessica (William) Rockers; grandchildren, Olivia and Liam; sisters, Jan O’Brien and Kathy Plaisance; brother, Bruce (Zobie) Rockers; numerous nieces and nephews; and his beloved cat, The General. Pete was predeceased by his parents and his sister, Leanne Verhaalen. A Visitation of Remembrance for Pete will be held from 12:30 p.m. until 1:30 p.m. on Friday, September 10, 2021 in the Daley Murphy Wisch & Associates Funeral Home and Crematorium, 2355 Cranston Rd., Beloit, WI. A Graveside Service will follow the visitation at 2:00 p.m. in the Floral Lawns Cemetery. Face mask will be required.

The family of Ronald "Pete" Rockers created this Life Tributes page to make it easy to share your memories.

Send flowers to the Rockers family.