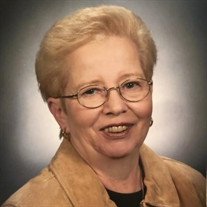 Rosanna Marie Johnston, 80, formerly of Beloit, WI, died peacefully in her sleep in Maineville, OH on Monday, December 21, 2020. She was born on August 30, 1940 in Beloit, WI the daughter of William and Monica (Schwartz) Jordan. Rosie graduated from Beloit Catholic High School in 1958. After graduation, she attended St. Anthony’s School of Nursing in Rockford, IL where she graduated on August 8, 1961. On December 25, 1959, her high school sweetheart Daniel Johnston proposed and they were married November 18, 1961 at St. Jude’s Catholic Church in Beloit, where she was a lifetime member. Rosanna worked as a Registered Nurse at Beloit Hospital, Beloit Memorial Hospital and then later for Dr. Richard Thayer at his private medical practice. Rosie enjoyed knitting and crocheting while watching movies or listening to music with Daniel. She was a Green Bay Packer and Milwaukee Brewer fan and enjoyed watching college basketball – both the Wisconsin Badgers and Xavier Musketeers (Cincinnati). She was always a nurse at heart and thrived on taking care of others. Rosanna is survived by her daughter, Brenda Johnston (Curt Gregory) of Maineville, OH and granddaughter, Jessica Hall of Maineville, OH; daughter-in-law, Gloria Johnston of Beloit; step grandchildren, Derrick Barber, Tracy Jackson, Stacy Jackson and Loria Boone all of the Beloit area. Sisters, Patricia (Chuck) Everson and Billie Jean (Jim) Lynch all of Beloit. Brother-in-law, Wilbur (June) Johnston of Beloit. Many beloved nephews/nieces and step great-grandchildren. She is also survived by her lifelong friend, Mary (Sennett) Nickolette of Beloit, her beloved English Lab, Jasper; and her grand dogs Sadie, Katie, and Sophie. Rosanna was preceded in death by her husband Daniel Johnston; her son William Johnston; parents William and Monica Jordan; brother-in-law Donald (Eleanor) Johnston; and in-laws David and Cleone Johnston. The family would like to thank Dr. John Mashny with TriHealth Cardiologists (and the nurses at the Coumadin Clinic), Dr. David Taylor with TriHealth Orthopedics, Dr. Aman Ahmed with Geros Medical Group and Amanda Mullins, CNP for the care provided to Rosie over the past several years. And a special thank you to “her girls” Maddie, Sybil, Amber, Martha, Cherokee, Shania, and Macy for all the love and exceptional care provided to Rosie. Funeral Mass of Christian Burial for Rosanna will be at 11:00 a.m. Tuesday, January 5, 2021 at St. Jude Catholic Church, 737 Hackett Street, Beloit, WI. Burial will be in Mt. Thabor Cemetery. Visitation of remembrance will be from 5 to 7 p.m. Monday in the Daley Murphy Wisch & Associates Funeral Home and Crematorium, 2355 Cranston Road, Beloit, WI. Visitation will also be from 10:00 until 10:45 a.m. Tuesday in the church. In memoriam of Rosanna, donations can be made to St. Jude’s Catholic Church of Beloit. Online condolences may be sent to the family at www.daleymurphywisch.com

Rosanna Marie Johnston, 80, formerly of Beloit, WI, died peacefully in her sleep in Maineville, OH on Monday, December 21, 2020. She was born on August 30, 1940 in Beloit, WI the daughter of William and Monica (Schwartz) Jordan. Rosie graduated... View Obituary & Service Information

The family of Rosanna Marie Johnston created this Life Tributes page to make it easy to share your memories.

Send flowers to the Johnston family.