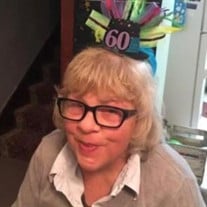 Roxane “Roxy” Elizabeth Jones-Brown, 64, of Beloit, WI, died on Tuesday, August 17, 2021 in her home. She was born on November 19, 1956 in Beloit, WI, the daughter of Lawrence Howard and Dora Jane (Wandell) Farage. After her father’s passing, her stepfather Byron Robert “Bob” Byrd helped raise her. Roxy was a 1974 graduate of Beloit Memorial High School and later went on to further her education. She married Steven L. Brown on July 20, 2003 in Metter, GA. Roxy was an employee of the Beloit School District, working as a secretary, paraprofessional, and educational assistant. She also worked for Campbell’s Soup and several nursing homes as a CNA. Roxy belonged to the First Congregational Church of Christ in Mason City, IA and when she moved to Wisconsin, she loved attending services at Central Christian Church in Beloit. In recent years, Roxy enjoyed her time spent with her friends attending the Beloit German Club. Survivors include her husband, Steven L. Brown of Beloit; children, Danica Shultz, Roland (Randi) Jones, Tara Jones, and D’Angelo Chenoweth all of Beloit; five grandchildren, Griffin, Parker, Riley, Evan, and Addison; father-in-law, Lester L. (Jody) Brown Jr.; and sister-in-law, Misty (Brian) Newman; her dogs, Frankie and Roxie; numerous nieces and nephews including special niece, Maria White; several other relatives and friends. She was predeceased by her parents; brothers, Tom, Chet, Jim, Marvin, and Steven; sister, Judy; one granddaughter, Gabriella; and mother-in-law, Ida L. Brown. Funeral Services will be at 11:00 a.m. on Wednesday, August 25, 2021 in the Daley Murphy Wisch & Associates Funeral Home and Crematorium, 2355 Cranston Rd., Beloit, WI, with Pastor David Meding officiating. Burial will be in Floral Lawn Cemetery. Visitation of remembrance will be from 5 to 7 p.m. on Tuesday in the funeral home. There will also be a visitation from 10:00 a.m. until the time of service Wednesday in the funeral home.

The family of Roxane "Roxy" E. Jones-Brown created this Life Tributes page to make it easy to share your memories.

Send flowers to the Jones-Brown family.