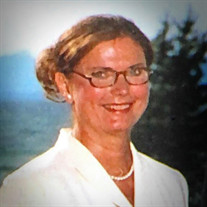 Sally Kelley Heineke of Beloit, WI, passed away December 9, 2020 at the age of 78 after a short illness. Born February 20, 1942 in Rockford, Illinois to William and Jean Stoddard, Sally graduated from Beloit Memorial High School in 1960 and subsequently attended University of Wisconsin- Madison and Prospect Business School in Milwaukee. After a brief career in Milwaukee, Sally married Daniel Thomas Kelley in 1963 and began a family. They had three children: Katherine (Dave) Kelley-Zanzig, Margaret Kelley (Rob) Mann, Daniel (Laura) Kelley and six grandchildren Hannah, Nathan, Benjamin, Ethan, Nicholas and Madelyn. Sally is also survived by her brother William Dean Stoddard Jr. (Linda) Sally later married John Heineke in 2002. She is survived by her devoted husband John and his children Laurie (Mark) Tolmie, Lynne Heineke, Heather (Marcos) Alcantar, Jonna (Genaro) Espinoza, Amy (Josh) Engebretson, and 11 step grandchildren: Andrew, Courtney, Alexis, Bryce, Kaiden, Mavy, Axel, Callen, Casen, Carsen, and Shea. She loved traveling to see her kids and grandchildren and had many fond memories of winters in Florida with John. She was an avid sports fan and loved her years attending Badger football games and cheering on John in his later coaching years. Sally was known for her love and devotion to her family and took great pride in the successes of her children, their spouses and her grandchildren. A private memorial service for Sally’s family will be held at 2:00 p.m. on Sunday, December 20, 2020 in the Daley Murphy Wisch & Associates Funeral Home and Crematorium, 2355 Cranston Rd., Beloit, WI, with Fr. Michael Resop officiating. Burial will be in East Lawn Cemetery. In lieu of flowers, memorials may be made to Our Lady of the Assumption Catholic Church. Online condolences may be sent to the family and a live stream may be viewed at www.daleymurphywisch.com.

Sally Kelley Heineke of Beloit, WI, passed away December 9, 2020 at the age of 78 after a short illness. Born February 20, 1942 in Rockford, Illinois to William and Jean Stoddard, Sally graduated from Beloit Memorial High School in 1960 and... View Obituary & Service Information

The family of Sally Jean Kelley Heineke created this Life Tributes page to make it easy to share your memories.