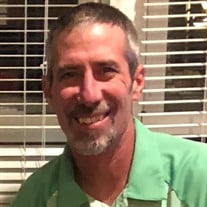 Shawn Arthur Harris, 50 years old, of Beloit, WI, died unexpectedly Saturday, January 9, 2021. Shawn was born December 8, 1970 to Paul and Marjorie Harris in Beloit, Wisconsin. He graduated class of ‘89 from Beloit Memorial High School and continued his education at Blackhawk Technical College. He is survived by his mother, Marjorie Harris; his children, Michael(Courtney), Kaden, and ReyAnn; grandchildren, Ashton, Alaina, and William; siblings, Mark, Todd(Lisa), Chris(Candice), and Amy(Jason) Walker; nieces and nephews, Shane, Morgan(Josh), Callissa(Jon), Jordan(Kim), Collin, MacKenzie, Sydnee, Jacey, Cheyenne; great nieces and great nephews, Charlotte, Blake, with two more on the way; many special aunts, uncles, and cousins; the mothers of his children, Natasha Weberg and Rebekah Harris; and a host of friends. He is preceded in death by his father, Paul; sister-in-law, Pamela; nephew, Evan; maternal grandparents, Clara and Arthur Nottestad, and Albin and Lela Benson; paternal grandparents Byron Harris, Virginia and Frank Brown. After working for Beloit Special Machining for years Shawn switched career paths working as a Journeyman Carpenter with his eldest son. He enjoyed being the handyman to anyone he could help, golfing, fishing, hunting at the family farm and making delicious food to share while having a good time with his family and friends. As a sports fan he enjoyed the Packers, Brewers and Wisconsin Badgers the most. Rock music, Carhartt, and Coors Lite were three staples in his perfect day. Shawn will be deeply missed by his huge family and his many friends that he considered family. We Love You! Funeral services for Shawn will be at 12:30 p.m. Sunday, January 17, 2021 in the Daley Murphy Wisch & Associates Funeral Home and Crematorium, 2355 Cranston Road, Beloit, WI. A visitation of remembrance will be from 10:30 a.m. until the time of service Sunday in the funeral home. In lieu of flowers, donations will be directed to a memorial fund for his children. Also, we ask for all of us to be a little more like Shawn and pay it forward. We ask that you abide by social distancing standards and please wear a mask.

The family of Shawn A. Harris created this Life Tributes page to make it easy to share your memories.

Send flowers to the Harris family.