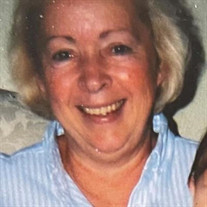 Sheila Ann Tuller, 73, of Beloit, WI, died of Leukemia on Tuesday, January 19, 2021 in the UW Hospital, Madison, WI. She was born on June 24, 1947 in St. Louis, MO, the daughter of Gene and Julie (Bresnahan) Denner. Sheila married James Tuller on November 27, 1997 in Beloit, WI. Sheila was employed by the North Palm Beach Country Club as the General Manager. After coming to Beloit, she worked along side her husband, Jim at the Krueger Haskell Golf Club as the food and beverage manager and bookkeeper. Sheila was a member of Central Christian Church, was an avid reader and enjoyed bible study. She loved traveling with her husband, seeing the countryside and the animals. Survivors include her husband, James Tuller of Beloit, WI; mother, Julie Denner of St. Charles, MO; son, Jason Dewberry of Nashville, TN and his children, Bryce, Parker, and Rowyn; stepchildren, Jeffrey (Wendy) Tuller of Port St. Lucie, FL and their children, Morgan and Mason, and Jennifer (Luis) Reyneri of Palm City, FL, and their children Makani and Luke; sisters-in-law, Margaret (Mike) Palubinski of Beloit, WI, and Sandra Fleming of Palmeto, FL. She was predeceased by her father. A Memorial Service of Remembrance will be held at a later date. Memorials may be given in her name to Central Christian Church or the Salvation Army.

The family of Sheila Ann Tuller created this Life Tributes page to make it easy to share your memories.

Send flowers to the Tuller family.