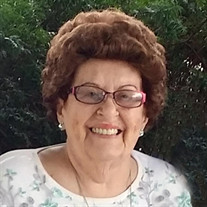 Shirley M. Carlson, 90, of Beloit, WI, died on Sunday, January 10, 2021 in her home. She was born August 18, 1930 in Viola Township, IL, the daughter of Frank and Grace (Gigous) Vincent. Shirley was a 1948 graduate of Lee Center High School. She married Stanley Hullah on November 5, 1949 in Oregon, IL. She later married Douglas Carlson on April 17, 2004 in Janesville, WI. Shirley was the owner of Shirley’s Restaurant until her retirement in 2000. After closing the restaurant, she enjoyed traveling with her husband and relaxing on the farm. She was a former member of Central Christian Church and the Senior Club of Rockford, IL. Survivors include her husband, Douglas Carlson; children, Stan (Karen) Hullah, Kris (John) Kyle, Lynn Hullah, Jeannine Hullah, Jacquie Hullah, and Les (Ginger) Hullah; 23 grandchildren; 38 great grandchildren; sister, Dorothy Coffman; many nieces, nephews, and cousins. She was predeceased by her parents; brother, Raymond Vincent; and sister, Norma Lee Owen. A Funeral Service for Shirley will be at 10:30 a.m. on Saturday, January 23, 2021 in the Daley Murphy Wisch & Associates Funeral Home and Crematorium, 2355 Cranston Rd., Beloit, WI, with Mark Maxted officiating. Burial will be in Shopiere Cemetery. Visitation of remembrance will be from 9:30 a.m. until the time of service Saturday in the funeral home. There will also be a visitation of remembrance the night before from 6 to 8 p.m. on Friday, January 22, 2021 in the funeral home. Social distancing and face mask are required.

The family of Shirley M. Carlson created this Life Tributes page to make it easy to share your memories.

Send flowers to the Carlson family.