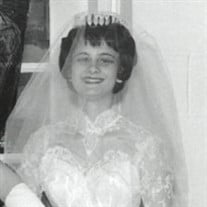 Suzanne Marie (Korb) Teed, 74, of South Beloit, IL drifted into the arms of God in the early morning hours on Sunday, March 21, 2021 at home with her loved ones by her side. Suzy was a daughter, sister, wife, mother, grandmother, great grandmother,... View Obituary & Service Information

The family of Suzanne Marie Teed created this Life Tributes page to make it easy to share your memories.

Send flowers to the Teed family.