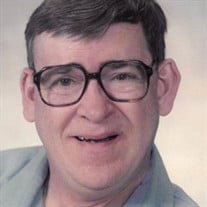 Terrance A. "Terry" Eibergen, 73, of Janesville, WI, died on Sunday, April 24, 2022 in Rock Haven Nursing Home. He was born on August 30, 1948 in Marshfield, WI, the son of William and Margaret (O’Leary) Eibergen. Terry was formerly employed by Kandu Industries and REM. He enjoyed school, being on the bowling team, and was an avid Packers and Brewers fan. Terry was a special guy, never complained about anything, and could always put a smile on everyone’s face. Survivors include his siblings, Beverly Halom of Orfordville, WI, Donald (Marcia) Eibergen of South Beloit, IL, Pamela Henthorn, and Rick (Angelia) Eibergen both of Beloit, WI; many nieces and nephews. He was predeceased by his parents; sister, Sharon Kay Eibergen; brothers-in-law, Gerald Halom and Raymond Henthorn; and nephew, Ricky Eibergen Jr. The family would like to give a special thank you to all the caregivers at REM and Rock Haven. A Memorial Service for Terry will be at 2:30 p.m. on Saturday, May 7, 2022 in the Daley Murphy Wisch & Associates Funeral Home and Crematorium, 2355 Cranston Rd., Beloit, WI. Visitation of remembrance will be from 1:30 p.m. until the time of service Saturday in the funeral home.

The family of Terrance Eibergen created this Life Tributes page to make it easy to share your memories.

Send flowers to the Eibergen family.