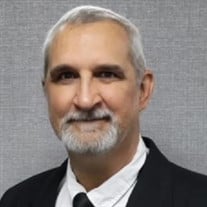 Thomas Demetrius Francik, 64, of Rockton, IL, passed away on Saturday, March 5, 2022. Tom battled cancer for the last 7 years and passed peacefully in his home with his wife and children by his side. He was born on January 3, 1958, in Blue Island, IL. He is the son of Carl and Anne (Kasper) Francik. Tom was a 1976 Hononegah High School graduate. He attended the University of Illinois where he earned his Bachelor’s Degree in Electrical Engineering. He married Trudi Herkis on September 18, 1982, at Our Lady of The Assumption Catholic Church in Beloit, Wisconsin. Tom’s 40-year career was spent as an Electrical Engineer. He began at Illinois Water Treatment in Rockford, IL and spent most of his career at General Motors in Janesville, WI prior to its closing. He spent a few years at ASA in Beloit, WI and ended his career with Ecolab in Roscoe, IL. Tom was a selfless, humble, kind, and hardworking man, who put his family and friends first. He was always there to lend a helping hand and showed his love best through acts of service. He could fix just about anything and would for anyone – from family and friends to complete strangers. He loved his family, making sure he never missed a thing. He was a great husband, father, brother, uncle, and friend. He taught us to enjoy the little things, laugh at yourself, and not take things too seriously. He was funny with a unique sense of humor. You could always count on him to give you a good laugh and his one-liners were the best! He loved spending Saturday mornings going to estate sales with his sister, riding motorcycles with his brothers, and enjoying a Manhattan with his Uncle Curly. The most important thing to Tom was his family and his life with Trudi. She was the perfect ying to his yang. He spent his days working and she spent hers taking care of the home so that their evenings and weekends could be enjoyed as a family. Together they built a beautiful life and created the most warm and welcoming home where family and friends spent countless hours. Trudi cared for him with love and respect until his very last breath. He was so proud of his title “Papa”. His 7 grandchildren lit up his world and he assigned each one their own special nickname. He always greeted them with a big high five and patiently taught them many things such as playing cards, his favorite game Yahtzee, and how to swim. He spent hours taking them for rides around the block on his motorcycle. He was the most cynical, yet faithful sports fan around. He was a devoted fan of the Chicago Bears, Bulls, Blackhawks, White Sox, and the Fighting Illini. He shared this passion with his brothers and brother-in-law, spending countless evenings and Sundays gathered in the living room cheering on their favorite teams. Tom was one-of-a-kind. A simple man who appreciated the little things in life and brought joy and laughter to everyone around him. He truly lived a blessed, peaceful, and content life. He is survived by his wife of 39 years, Trudi Francik; children, Chelsea (Patrick) Ballou of Roscoe, IL, Matthew (Jennifer) Francik of South Beloit, IL, and Elizabeth Francik of Indianapolis, IN; grandchildren, William, Audrey, John, and Ava Ballou; Mason, Asher, and Hazel Francik; siblings, Mark (Karen) Francik of Berwyn, IL, Paul (Mijong) Francik of Korea, John (Giacomina) Francik of Rockford, IL, Annette (Ed) Taroli of Roscoe, IL, and Joel (Maggie) Francik of Roscoe, IL; sisters-in-law, Elody Francik, Jodie (Peter) Ferwerda, Lori (Tim) Quinn, and Tami (Ron) Northrop; brother-in-law, Timothy Haas; many nieces, nephews, cousins, and friends who all held a special place in Tom’s heart. Tom was predeceased by his father, Carl Francik; mother, Anne Francik; brother, Carl Francik, Jr.; sister-in-law, Tori Haas; mother-in-law and father-in-law, Audrey and Thomas Herkis. A Service of Remembrance will be held at 10:45 am on Saturday, March 12, 2022 at Our Lady of the Assumption Church, 2222 Shopiere Rd., Beloit, WI. A Funeral Mass of Christian Burial will immediately follow at 11:00 am on Saturday in the church. Visitation of Remembrance will be held from 4:00 pm until 7:00 pm on Friday, March 11, 2022 in the Daley Murphy Wisch & Associates Funeral Home and Crematorium, 2355 Cranston Rd., Beloit, WI. Memorials in his name will be established at a later date.

Thomas Demetrius Francik, 64, of Rockton, IL, passed away on Saturday, March 5, 2022. Tom battled cancer for the last 7 years and passed peacefully in his home with his wife and children by his side. He was born on January 3, 1958, in Blue... View Obituary & Service Information

The family of Thomas D. Francik created this Life Tributes page to make it easy to share your memories.

Thomas Demetrius Francik, 64, of Rockton, IL, passed away on...

Send flowers to the Francik family.