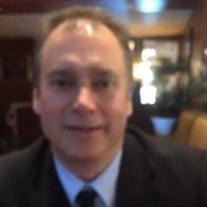 Thomas S. Wikel, 59, of Rock Island, IL, died Sunday, November 29, 2020 at Trinity Hospital in Rock Island, IL, from complications from the COVID virus. Tom was born June 23, 1961 in Beloit, WI, the son of Donald and Edwina (King) Wikel. He was a graduate from Beloit Memorial High School in 1979. He was a machinist for Beloit Corporation and their following owners until the doors were finally closed. Tom then became an industrial salesman for several companies in Rockford, IL. In his youth, Tom participated in many sports earning many athletic awards, and as an adult he enjoyed pool, golf, outdoor activities, and was also an avid Green Bay Packer, Milwaukee Brewer and Bucky Badger fan. He was a member of a pool league team that qualified for the national competition. Tom loved his furry friends and companions that he had over the years. He is now back with his beloved Marco who predeceased him. In the last few years while living in Rock Island, Tom was a generous and giving man to several non-profit agencies. He will be warmly remembered by many who were recipients of his time and generosity. Tom is survived by his daughter, Kayla (Brad) Potter; grandchildren, Brynley, Kade and Kamri; his mother, Edwina; sister, Vicki (Gary) Dencker; brother, Steve (Lana) Wikel; nephews and nieces, Ryan, Jordan (April), Christopher (Katharine), Nick, Kimberly (Justin), Logan, and Lexi (Matt); six great nephews and great nieces; step daughter, Shalen (Travis) Wheelock and their children Stella, Harper, Audrey and Jackson; mother of his daughter, Lori Stocks; good friends, Garth Carlson and Vickie Larson Shipler; as well as many other dear friends. Tom was predeceased by his father, Donald Wikel; other senior family members and step son, Tad Cherry. Private family service will be held. A celebration of Tom’s life will be held at a later date. In lieu of flowers, memorials may be given in his name to the Southern Wisconsin Humane Society.

The family of Thomas S. Wikel created this Life Tributes page to make it easy to share your memories.

Send flowers to the Wikel family.