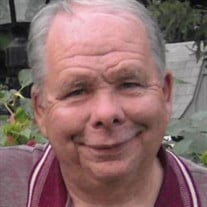 Timothy Louis Knipp, 72, of Janesville, WI, passed away on Saturday, April 16, 2022 at Mercy Hospital and Trauma Center. He was born on December 13, 1949 in Beloit, WI, the son of George and Dorothy (Knight) Knipp. Tim was a 1969 Beloit Catholic High School graduate. He later received his Associates Degree in Computer Operations. Tim married Becky Crook on May 3, 1986 at St. Mark Lutheran Church of Janesville. Tim was formerly employed by Fairbanks Morse until his retirement in 1999. He continued to stay busy with his various jobs. Tim was a member of St. John Vianney Catholic Church of Janesville. He was a third-degree member of the Knights of Columbus St. Thomas Council #605. Tim was an avid sports fan and was a referee at many Beloit and Janesville Catholic school games in his younger years. His favorite teams were the Wisconsin Badgers, Chicago Bears and Beloit Catholic High School Crusaders. Weekends were usually spent bowling on a couples league, golfing an area golf course or attending a Wisconsin game somewhere. Tim and Becky traveled extensively around the US throughout their marriage with the trips often centered on golfing, Wisconsin games or cruises. Survivors include his wife, Becky Knipp; brother, William (Linda) Knipp of Rockton, IL; sister, Coleen Abeyta of Colorado Springs, CO; father-in-law, Virgil Crook of Janesville, WI; sister-in-law, Judy Crook of Janesville, WI; nephews, Bradley (Vanessa) Knipp, Brian Knipp both of Roscoe, IL and Calvin Gutheridge of Portland, OR; nieces, Katie Abeyta of Fort Collins, CO and Amy (Steven) Tucker of Janesville, WI; many other relatives and friends. Tim was predeceased by his parents; mother-in-law, Delores Crook; and brother-in-law, William Abeyta. A Memorial Service for Tim will be held at 1:30 p.m. on Saturday, May 14, 2022 in the Daley Murphy Wisch & Associates Funeral Home and Crematorium, 2355 Cranston Rd., Beloit, WI. Inurnment will be in Milton Lawn Memorial Park at 1:30 p.m. on Monday, May 16, 2022. Visitation of Remembrance will be held from 12:00 p.m. until the time of service Saturday in the funeral home.

Timothy Louis Knipp, 72, of Janesville, WI, passed away on Saturday, April 16, 2022 at Mercy Hospital and Trauma Center. He was born on December 13, 1949 in Beloit, WI, the son of George and Dorothy (Knight) Knipp. Tim was a 1969 Beloit Catholic... View Obituary & Service Information

The family of Timothy L. Knipp created this Life Tributes page to make it easy to share your memories.

Timothy Louis Knipp, 72, of Janesville, WI, passed away on Saturday,...

Send flowers to the Knipp family.