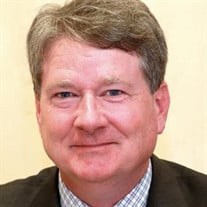 Timothy F. McKearn “Tim” Husband, father, brother, friend, business owner, civic leader, teacher, 4th generation son of Beloit, passed away at his home surrounded by family on Friday, October 29, 2021. Preceded in death by his father, Gene McKearn and mother, Donna. Survived by his wife of 38 years, Deborah; sons, Michael (Katie) McKearn of Viroqua, WI, and Patrick McKearn of Beloit; siblings, Cyndy (Jack) Bowles of Saucier, MS, Colleen (John) Woods of Eolia, MO, Michael (Brooke) McKearn of Beloit, and Frank (Jean Marie) McKearn of Beloit; nieces and nephews, Jeremiah, Jon, Amanda, Abbigail, Collin, Jayson, Austin, Isabelle, Nikolas (dec.), Frankie, Daniel, Gabriel, Joseph, Fran, Katie, Joleen, Sarah, Cotey, Jordan, Andrew, April, and Matthew; and sisters-in-law, Belinda Elliott, Denise (Terry) Nadosy and Ann Hoile. Tim was born August 26, 1959, in Beloit, WI, and was raised in their multi-generational family home on Riverside Drive. He attended Our Lady of the Assumption Catholic School and graduated from Beloit Catholic High in 1977 where he was a member of the state championship basketball team. He received his Political Science and Secondary Education degrees from UW-Whitewater. Tim married his high school sweetheart, Debbie Elliott on September 24, 1983, and they made their home in Beloit. They later moved to the McKearn family homestead. Their two sons became the fifth generation of McKearns to be raised in the home. Tim always credited Debbie as being his support in all his endeavors. After graduation, Tim worked as a teacher at Beloit Catholic High. He then worked as a Broker for Robert W. Baird and Raymond James in Beloit before leaving to become the principal of Beloit Catholic High from 1995-1999. From 1999 to 2012, he worked at Beloit College, serving in a variety of capacities and left in 2012 as the Director of Major Gifts. After leaving Beloit College, he worked as a Director at The James Company and then as the Director of the Blackhawk Technical College Foundation. Tim will be remembered for his dedication in serving the Beloit Community. He served as President of Family Promise, The Downtown Beloit Association, Visit Beloit, and St. Vincent de Paul. He served on the boards of the American Cancer Society, Rock County OIC, Red Cross, Midnight Basketball, Rock County Habitat for Humanity, Beloit Historical Society, and Stateline Community Foundation, among others. Tim was the co-recipient of the Laurence Raymer Headliner Award in 2020. Tim was a teacher at heart and his love of teaching followed through in all aspects of his life, even after leaving the classroom. His skill as a teacher was evident. It would not be uncommon for a former student to stay in touch with him or approach him years later to say how much of an impact he had on their life. Being involved was important to Tim, whether that was the faith community or the community he lived and worked in. He was a tireless promotor of the greater Beloit area. While traveling the state when working for The James Company, if he witnessed anyone wince when Beloit was mentioned, he would cheerily ask them, “When was the last time you were there?” Tim was a man of strong faith which impacted everything he did. The way he lived the last two years of his life, after receiving his cancer diagnosis, was evidence of this. Tim’s most important role, however, was as a husband, father, brother and friend. He was a gifted conversationalist and when a story was needed, he was always ready to provide one. A Visitation of Remembrance for Tim will be held from 4:00 to 6:30 pm on Thursday, November 4, 2021 at Our Lady of the Assumption Catholic Church, 2222 Shopiere Rd., Beloit, WI with a rosary to be recited at 3:45 p.m. A service of remembrance will be held at 6:30 p.m. in the church. A Funeral Mass of Christian Burial will be held at 11:00 a.m. on Friday, November 5, 2021 with Fr. Michael Resop officiating. Inurnment will be in Calvary Cemetery. Daley Murphy Wisch & Associates Funeral Home and Crematorium, 2355 Cranston Rd., Beloit, WI, assisted the family with arrangements. In lieu of flowers, memorials may be given in his to name to the Tim McKearn scholarship through the Stateline Community Foundation.

The family of Timothy McKearn created this Life Tributes page to make it easy to share your memories.

Send flowers to the McKearn family.