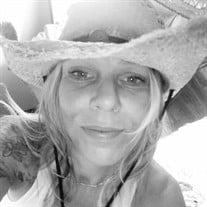 Tonja Christine Woerth, 49, of Beloit, WI, passed away unexpectedly in her home on Sunday, January 10, 2021. She was born on November 11, 1971 in Janesville, WI, the daughter of Bill and Judy (Milstrom) Woerth. Tonja married Todd Taylor. Together they had a daughter, Tabitha Christine Taylor. She later married Robert Rohrer and together they had a son, Colin Alexander Rohrer. Tonja was employed by the South Beloit, IL, Post office as a rural carrier. She has a zest for life and an extremely outgoing personality. Tonja would always greet you with a room-brightening smile, a tight hug, a big smooch or a smack on the behind! If you didn’t have a nickname when you met her, you most likely did shortly thereafter. Tonja loved to fish with her special man, Brad DeLorimier and other friends. She enjoyed the outdoors, camping, boating, snowmobiling, and tubing. Tonja loved to drop in the snow at random moments and make snow angels. She was a Green Bay Packer fan and was always up for a football party. Tonja was the star of the show wherever she went. Her presence in this world will be greatly missed by all her family and friends. Tonja loved her children, grandchildren, family, friends, niece, Misty Jewels and cousin, Russell “Bear” (Tiffany) Woerth fiercely. Family was of the utmost importance to her. Her family was her everything, and she always looked forward to spending “Grammie Time” with her grandchildren and grand puppies. She is survived by her children, Colin (Maria Fulton) Rohrer and Tabitha (Kevin Barnes) Taylor; grandchildren, Cherish and Timothy Holmes, and Kacey Barnes; step father, Phil “Papa” Anderson; step brother and sisters, Rex (Bobbie Jo) Anderson, Julie (Tim) Meuret, Katherine Anderson, Phyllis (Randy) Richards and Carla (Scott) Durand; and many other nieces, nephews and cousins. She was preceded in death by her father, Bill Woerth; mother, Judy Anderson; and former husband, Todd Taylor. Funeral service for Tonja will be at 11:00 a.m. Tuesday, January 19, 2021 in the Daley Murphy Wisch & Associates Funeral Home and Crematorium, 2355 Cranston Road, Beloit, WI. Visitation of remembrance will be from 10:00 a.m. until the time of service Tuesday in the funeral home. In lieu of flowers, memorials may be given to her children for expenses and a fund for them.

Tonja Christine Woerth, 49, of Beloit, WI, passed away unexpectedly in her home on Sunday, January 10, 2021. She was born on November 11, 1971 in Janesville, WI, the daughter of Bill and Judy (Milstrom) Woerth. Tonja married Todd Taylor. Together... View Obituary & Service Information

The family of Tonja Christine Woerth created this Life Tributes page to make it easy to share your memories.

Send flowers to the Woerth family.