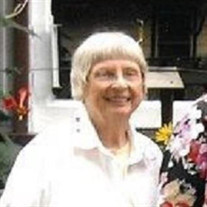 Valerie June Hunter Dunagan was born on March 22, 1930 in Oak Park, Illinois and passed away on March 4, 2021. She grew up mostly in Villa Park, Illinois and attended Illinois State Normal University of Normal, Illinois. There she majored in girls’ physical education and preformed with a collegiate circus troupe as a trapeze artist. In Normal, she also met her husband, Richard Dunagan. They married in 1952. When he entered the army after college, she accompanied him to Karlsruhe, Germany, where she worked as a civilian employee. They moved to Beloit in 1955. Her jobs included physical education teacher, vocational Spanish teacher, and secretary at First United Methodist Church in downtown Beloit. She was active in community groups such as Girl Scouts, the hospital auxiliary, the AFS student exchange program and the Friends of Beckmann Mill. She also enjoyed playing folk music on dulcimers and recorders. An outdoor enthusiast, she enjoyed camping, bicycling, and gardening. She was a member of the Unitarian Church of Rockford, Illinois. She was predeceased by her parents, Harold and Ruth (Friess) Hunter of Villa Park, Illinois and her younger brother James Hunter of Chadds Ford, Pennsylvania. She is survived by her husband, Richard Dunagan; daughters, Holly Dunagan and Marcy Dunagan both of Minneapolis; granddaughter, Cassandra Moore, also of Minneapolis; nephews, James Jr., Jeffrey, and Todd Hunter. She will be missed by Carlos Acosta and his family, of Houston, Texas. She will also be missed by James and Ida Ann Dunagan of Maryland and Sandra Sophia Dunagan of Indiana. A memorial service will be announced at a later date. Daley Murphy Wisch & Associates Funeral Home and Crematorium, 2355 Cranston Rd., Beloit, WI, is assisting the family.

Valerie June Hunter Dunagan was born on March 22, 1930 in Oak Park, Illinois and passed away on March 4, 2021. She grew up mostly in Villa Park, Illinois and attended Illinois State Normal University of Normal, Illinois. There she majored in... View Obituary & Service Information

The family of Valerie J. Dunagan created this Life Tributes page to make it easy to share your memories.

Send flowers to the Dunagan family.