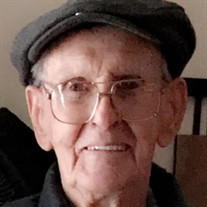 Vilas A. Olson, 100, of Janesville, WI, left this Earth peacefully on Friday, January 22, 2021 with the angels from the home of his granddaughter and her husband, Kim and Dan Harrison, where he stayed for a short time. He was born on February 25, 1920 in Oasis Township, WI, the son of J. Hanford and Eva (Bade) Olson. Vilas was a Wisconsin resident all his life. He proposed to his bride in an airplane at a county fair and married Bonnie Monroe on December 22, 1941 in Kahoka, MO. She predeceased him on December 13, 1999. Vilas was a farmer in Wild Rose, WI until 1955. The family moved to Beloit where he worked at the Beloit Iron Works for ten years. Vilas also worked at Cedar Lane Trailer Park in Janesville and the Ledges Country Club for four years. At this time, they purchased the old homestead from his wife’s great grandfather in Hancock, WI. They remodeled the house and lived there for 30 years before moving to Janesville in 1998. After his retirement, they traveled the entire U.S. in their motorhome and spent most winters in the Apache Junction, AZ area. Vilas loved to build campfires where people gathered around to exchange their life stories. They made many lifetime friends. He was a regular attender of churches during his life even while traveling, most recently attending the Bethel Baptist Church in Janesville for 21 years. Vilas’ beautiful soul lives on in his children, Deanna (Dee) Alderman, Judi Krueger, and Roger (Mary) Olson; grandchildren, Lori (Terrie) DelMontier, Lisa (Jeff) Rath, Kim (Dan) Harrison, Tammy (Jim) Plemon, Roger (Christy) Olson Jr., Michele Olson, and Todd (Amanda) Olson; great grandchildren, Ryan DelMontier, Schuyler Rath, Brittany Tuescher, Danielle Harrison, Mitchell Lee, Maxwell Olson, Madelyn Olson, Helaina Baker, Harrison Baker, and George, Johnny and Dixie Olson; several other relatives and friends. May our father live on forever in peace, knowing he will never be forgotten and is always loved by his family and friends. He was predeceased by his parents; wife, Bonnie; sons-in-law, Rod Alderman, Gene Hollister, and Harvey Krueger; great granddaughter, Hailey Rath; six siblings; and special friend, Ida Feichter A Funeral Service for Vilas will be at 2:00 p.m. on Wednesday, January 27, 2021 in the Daley Murphy Wisch & Associates Funeral Home and Crematorium, 2355 Cranston Road, Beloit, WI. Burial will be in Baldwin Cemetery. Visitation of remembrance will be from 1:00 p.m. until the time of service Wednesday in the funeral home. Social distancing and face mask are required. In lieu of flowers, a memorial bench is being purchased for the Hearthside Home where he lived previously or given to Beloit Regional Hospice.

Vilas A. Olson, 100, of Janesville, WI, left this Earth peacefully on Friday, January 22, 2021 with the angels from the home of his granddaughter and her husband, Kim and Dan Harrison, where he stayed for a short time. He was born on February... View Obituary & Service Information

The family of Vilas A. Olson created this Life Tributes page to make it easy to share your memories.

Send flowers to the Olson family.