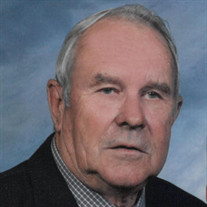 Wayne William Swanson, 88, of Beloit, WI, died on February 22, 2021 in his home. He was born on May 12, 1932 in Duluth, MN, the son of Axel William and Inez May (Kinsella) Swanson. Wayne was a veteran serving with the U.S. Air Force from 1953 until 1957. He married Helen Christofferson on March 6, 1954 in Dubuque, IA. She predeceased him on June 8, 2009. Wayne was employed by the City of Beloit as a Police Officer for 30 years and then as a Bus Driver for the Beloit Turner School District for 20 years. He was a member of Our Lady of the Assumption Catholic Church. Wayne was a member of the Beloit Police Retirees and enjoyed getting together and having breakfast with them for many years until the pandemic hit. In his younger years he enjoyed fishing, traveling, and being up north at the cabin with family. He also enjoyed going to the casino and buying cars. Wayne was a loving husband, father, grandfather, and great grandfather. Survivors include his children, Jean Shallenberger, Wayne (Cathy) Swanson Jr., Joseph Swanson, Joy (Mike) Theis, Mary (Doug) Clark, and Kathleen (Mike) Saladino; 11 grandchildren; nine great grandchildren; sister, Gail Arndt; brother, Albert (Wendy) Swanson; dog, Thunder; numerous nieces and nephews. He was predeceased by his parents and brother, Dale Swanson; son-in-law, Ted Shallenberger. A Memorial Service for Wayne will be at 10:30 a.m. on Wednesday, March 3, 2021 in the Daley Murphy Wisch & Associates Funeral Home and Crematorium, 2355 Cranston Rd., Beloit, WI, with Fr. Michael Resop officiating. Inurnment will be in Mt. Thabor Cemetery. Visitation of remembrance will be from 9:30 a.m. until the time of service Wednesday in the funeral home. Social distancing and face mask are required.

The family of Wayne W. Swanson created this Life Tributes page to make it easy to share your memories.

Send flowers to the Swanson family.