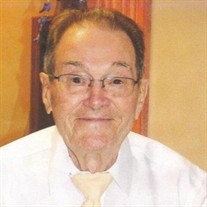 Wilber “Bill” D. Briscoe, 97, of Beloit, WI, died on Friday, December 18, 2020 in Riverside Terrace, Beloit, WI. He was born on October 17, 1923 in Beloit, WI, the son of Oliver and Silvia (Dance) Briscoe. Bill was a graduate of South Beloit, IL. He was a veteran serving with the U.S. Navy from 1942 until 1946. Bill married Marcella Trieloff on May 17, 1947 in Beloit, WI. She predeceased him on February 22, 2012. Bill was employed by Fairbanks Morse in the quality control department, retiring in 1984. He enjoyed big band music and dancing. Survivors include his brother, Carl Briscoe; sister, Marilyn Ruppert; and good friend, Dorothy Roberts. He was predeceased by his parents. A Graveside Service for Bill will be held in Milton Lawns Memorial Park, Janesville, WI at a later date. Daley Murphy Wisch & Associates Funeral Home and Crematorium, 2355 Cranston Rd., Beloit, WI, assisted the family with arrangements.

The family of Wilber "Bill" D. Briscoe created this Life Tributes page to make it easy to share your memories.

Send flowers to the Briscoe family.