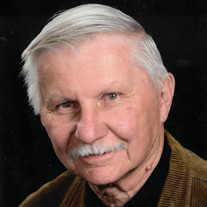 William “Bill” W. Kerwin, 84, of Beloit, WI, died on Friday, March 19, 2021 in his home. He was born on February 6, 1937 in Beloit, WI, the son of John and Annetta (Quakenbush) Kerwin. Bill was a 1955 graduate of Beloit Memorial High School. He later attended Milton College and followed his true love to Eureka College, Eureka, IL. Bill married Elizabeth Stout on September 10, 1960 in the First Baptist Church, Beloit, WI. Bill was previously employed by the Beloit Corporation as an engineer and mechanical designer. He later worked as an engineer at Fairbanks Morse for 15 years where he worked on the opposed piston engines. Bill was proud to have worked on the “stand-by engine” for the “Trident Submarine.” After his retirement, he worked at Elder Beerman’s as an associate in the men’s department. He was an active member of the First Baptist Church and Bill and his wife worked as junior high youth leaders every Sunday night. He also worked on the Christian concerns committee, the scholarship committee, the diaconate, and a member of the Triple “M” group at the church. Bill enjoyed vacationing in Gulf Shores, AL and Huntington Beach, CA, visiting his granddaughter in Texas and watching his grandson play volleyball. He and his wife also enjoyed traveling the United States and spending time in Green Lake, WI for their time of relaxing and appreciating the atmosphere and quietness of the outdoors. Survivors include his loving wife of 61 years, Elizabeth Stout Kerwin; son, Scott Kerwin; daughter, Debbie Kerwin; grandchildren, Nikki (Jim) Kerwin Magiera, Alec Podrasky, Paige Kerwin, and Hayden Pearson; great grandchildren, Peyton and Presley Magiera; and brother, Terry Kerwin. He was predeceased by his parents. A Funeral Service for Bill will be at 10:30 a.m. on Wednesday, March 24, 2021 in First Baptist Church, 617 Public Ave., Beloit, WI, with Pastor Walt Hoshaw officiating. Burial will be in East Lawn Cemetery. Visitation of remembrance will be from 5 to 7 p.m. Tuesday in the Daley Murphy Wisch & Associates Funeral Home and Crematorium, 2355 Cranston Rd., Beloit, WI. There will also be a visitation from 9:30 a.m. until the time of service Wednesday in the church. Social distancing and face mask are required. Memorials in his name may be given to the First Baptist Church.

The family of William "Bill" W. Kerwin created this Life Tributes page to make it easy to share your memories.

Send flowers to the Kerwin family.