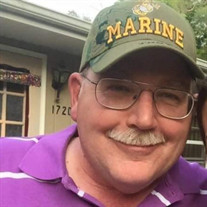 William “Bill” Tinder, 67, of Beloit, WI, transcended his physical form on Thursday, February 4, 2021 while holding the hands of his daughters. Bill, also known as "Wild Bill" to his adoring karaoke fans and deer hunting companions, was a true lover of life and of people. He enjoyed telling jokes to provoke a smile and was able to find common ground with anyone. Bill enjoyed mowing the lawn (whether it needed it or not), vicariously coaching the Green Bay Packers, and acquiring vast amounts of knowledge about history. He proudly served as a Marine in the US Marine Corps, followed by 30 years of service and dedication at General Motors, followed by being an honorable member of The Lions Club. He was most proud of his family and took the role of being a provider very seriously. He will always be remembered for his compassionate nature towards people and animals, his willingness to sacrifice his time, energy, and resources, and his unorthodox method of drying-off vehicles. Aside from leaving behind his avid love for political debates and his beloved dog Gypsy, he also leaves behind his wife of 38 years, Ilah; son, Robert; daughters, Tina, Lynette, Holli, and Kelli. He is survived by many grandchildren and great grandchildren; all who he loved very much. He is also survived by his sisters, Lisa and Jill; and brothers, Mike, Danny, James, and Timmy John. He was preceded in death by his mother, Barbara; father, Larry; brother, Larry; sister, Rebecca "Pidge"; nephew, Stevie; and grandson, Adam. A Funeral Service will be at 1:00 p.m. on Thursday, February 11, 2021 in the Daley Murphy Wisch & Associates Funeral Home and Crematorium, 2355 Cranston Road, Beloit, WI. Burial will be in Floral Lawn Cemetery. Visitation of remembrance will be from 6 to 8 p.m. on Wednesday in the funeral home. Social distancing and face mask are required.

The family of William "Bill" L. Tinder created this Life Tributes page to make it easy to share your memories.

Send flowers to the Tinder family.